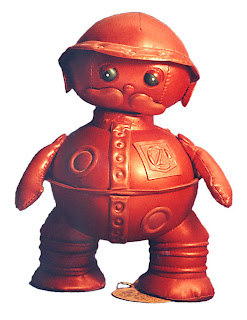 Wel-come to to-day's blog. I am Tik-Tok. I am a hard-to-find RE-TURN TO OZ toy of Ja-pan-ese man-u-fact-ure.

Okay, enough of that! This charming little fellow was produced in Japan in 1985 as part of the huge merchandising campaign for Walt Disney Studios' Return to Oz. Tik-Tok and his friends, the Scarecrow, the Tin Woodman, and Jack Pumpkinhead, were seemingly sold only at Tokyo Disneyland. They were produced by a company called Heart à Heart and were issued in three sizes. The smallest were 3" to 4" tall and made of hard plastic (the Scarecrow and Jack wear fabric clothing).

The middle-sized version of Tik-Tok is shown here. He stands about 10.5" tall and is stuffed. His skin is a slick copper-colored vinyl fabric. His three friends were issued in proportional sizes and Tik-Tok is the shortest of each set. Much bigger versions of all four were also issued in which Tik-Tok stands about 20" tall.

Read about a Return to Oz Scarecrow toy in a later blog post!

If you want to see some cool Return to Oz stuff, exchange stories, ask questions, and share collecting tips, you should come to the Winkie Convention in Pacific Grove, California, July 23-25, 2010. On Saturday morning at 10:45 AM, Return to Oz collector Freddy Fogarty will present Returning to Oz: a Collector's Roundtable. Twenty-five years after the film’s release, it has a grown into a cult favorite. Come share your feelings and memories about the movie and see some of the incredible merchandising the film generated! Information on the Winkie Con is available in the link below, as well as a link to subscribe to the monthly Winkie Con newsletter. Take a look!

SUBSCRIBE to the Winkie Con e-mail Newsletter
Posted by David Maxine at 12:25 PM

I've never seen the 3" Tik Tok come up for sale anywhere. How many do you think there were made?

Myaaahhhh!
I want one so bad ;n; All the return to Oz characters are adorable! ;n;ar