Comic Con and The Land of Oz 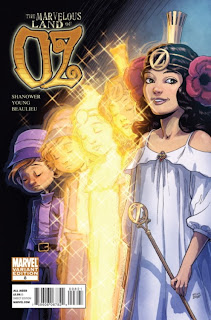 Hungry Tiger Press and Eric Shanower will be at our usual spot - Booth 2008 (across the aisle from DC Comics). If you're gonna be at Comic Con, please come say hello and take a look at some of our Comic Con exclusives!

The final issue of the Eric Shanower and Skottie Young comics adaptation of The Marvelous Land of Oz hits comic stores today. I'm especially fond of the alternate cover by Eric Shanower! I considered letting folks in on how the story ends, but you'll be getting no tip from me!
Posted by David Maxine at 8:00 AM