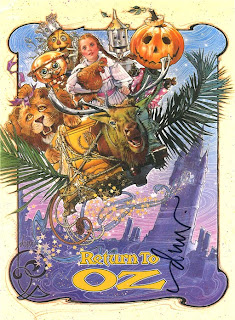 One of the Ozzy highlights of San Diego Comic Con International this year was the chance to meet legendary movie poster artist Drew Struzan. While Drew has created the posters for such blockbusters as the Star Wars films, E.T., Indiana Jones, Harry Potter, Back to the Future, and many, many more, my interest in meeting Drew was because he painted the poster for Disney's 1985 film Return to Oz.

At the presentation I saw a short preview of a wonderful new documentary on Drew, heard him speak about his career, and then many of us lined up to get things signed. I took along my main Return to Oz poster, a copy of Drew's other "Mombi Head" Return to Oz poster, and being a bit compulsive, I also took my copy of the original press kit (shown at right) and the Scholastic graphic novel which also featured Drew's poster design. 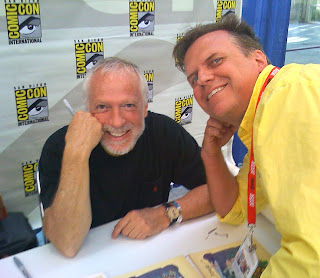 Drew's Return to Oz poster is much more rooted in the world of illustration than many of his other film posters which often have a more photo-realistic quality. It was most interesting to see the close-ups of his photo realistic posters. These show an incredibly stylized design and painting technique which strongly reminded me of J.C. Leyendecker.

Advance copies of a new book on Drew's posters,  The Art of Drew Struzan, premiered at Comic Con. Alas, they sold out very quickly and I didn't get one.

So Drew signed my RTO stuff, we chatted for a few minutes, and the nice fellow behind me in line snapped a photo for me (Drew's the one in black). It was a neat little escape from our Comic Con booth.
Posted by David Maxine at 8:00 AM