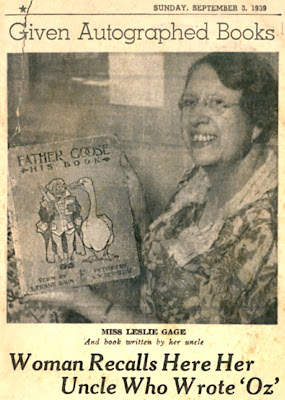 The clipping appeared in one of the Minneapolis papers and is dated Sunday, September 3, 1939. This date is only a couple weeks after the premiere of the 1939 MGM Wizard of Oz film, and I suspect this highly inaccurate article was some sort of local MGM-oriented publicity.

And it was verse like that that first launched L. Frank Baum on a literary career which produced the "Oz" books of children's books - now picturized in the technicolor film, The Wizard of Oz.

The story can be told by Miss Leslie Gage, Winona, Minn., now visiting in Minneapolis with Miss Matilda Frey, 3929 Aldrich avenue S. Miss Gage is the niece of L. Frank Baum, and as a girl received autographed copies of his books as they came off the press.

He lived at first in Chicago, then moved to California to live during much of the writing of The Wizard of Oz, first of a series of "Oz" books which sold a total of some 9,000,000 copies.


*     *     *
Baum's first book was Father Goose, His Book and the foregoing verse is one of those written by him for it. The verses were hand-lettered on special illustrations from which plates were made. Success of Father Goose inspired Baum to further writing, and his California home was named "The Sign of the Goose."

Father Goose ended a period of financial straights for Baum, who had failed in an effort to run a notions store in South Dakota. He went to Chicago and there spent his last dollar for a rose - he was a lover of flowers.

The "Oz" stories were written later for his four sons and their friends. He told them the stories as they gathered before the family fireplace. His mother insisted he write them down, and he did so.


*     *     *
At the Hollywood premiere of The Wizard, Mrs. Baum, widow of the author, was an honored guest. Baum died in 1920. Miss Gage saw the picture Wizard of Oz at the first opportunity and thought it a first rate transposition of the story. Her only criticism was that the little girl of the books might have been somewhat too grown up in the picture version.


While this was certainly an interesting little article, a few of the more extreme inaccuracies must be corrected.

Baum's first published book was Mother Goose in Prose (1897) not Father Goose, His Book. Baum's home, "The Sign of the Goose," was at Lake Macatawa, Michigan, not in California. And similarly,  The Wizard of Oz was written in Chicago, not California.

It was Baum's mother-in-law, Matilda Joslyn Gage (grandmother of the Leslie Gage in the article), that suggested Baum write down his stories so they might be published. Lastly, Baum died on May 6, 1919, not in 1920.