This summer, August 8-10, 2014, the Winkie Con will be holding its 50th annual convention celebrating L. Frank Baum and the magical Land of Oz. One of the favorite pastimes of Winkie Con has always been dressing up for the Costume Contest on Saturday morning - maybe this year you should make a costume and join in the Ozzy fun! This year's Costume Contest will take place on Saturday morning of the CON, August 9, 2014.

People do superb work on very elaborate costumes, such as this fine Hammerhead from The Wonderful Wizard of Oz, built and worn by Oz fan Dick Rutter. But many people make very simple and very effective costumes, too; Dorothy, the Shaggy Man, and the Scarecrow aren't nearly as difficult - and it's just as much fun participating!


You can click on any of the pictures to see them enlarged.

The earliest photo I've found of a Winkie Con costume contest is from Winkie Con 5 in 1968 when we were so small we met at the home of Warren Hollister in Santa Barbara. Leading the parade is charter Oz Club member Ruth Berman as Princess Isa Poso from Ojo in Oz.


Oz fans dress up as characters from both the Oz books and Oz movies. In 1989, for the 50th anniversary of the classic MGM Wizard of Oz film, we got a veritable "gale" of Dorothys! Did you know that a large group of Dorothys was called a gale?


Here's a cool grouping from 1978 showing General Jinjur, Gureeda from Speedy in Oz, the Tin Woodman, and Tip.


Use your imagination! You still have over five months until this summer's gala Winkie Con 50 - and it is so much fun! And you can reuse your costume for next Halloween!

In 1986 we saw a wonderfully effective Woozy Costume! One might think the Woozy would be hard to do, but look how great this basic construction from cardboard, paper, and paint turned out! The Woozy is being followed by Gloma the Black Witch from The Wishing Horse of Oz and Clocker from Pirates in Oz - both simple yet effective costumes.


This year at Winkie Con we are celebrating the 100th anniversary of the publication of L. Frank Baum's Tik-Tok of Oz. Tik-Tok, created in 1907 in Ozma of Oz, is arguably one of the first sentient robots! Indeed, our "theme" this summer is "Clockwork in Oz" - there's a $50 cash prize for the costume best reflecting that theme - so why not get a little steampunk on and make a Tik-Tok costume? Or even come dressed up as Mr. Smith or Mr. Tinker, the two men who  manufactured Tik-Tok in the first place! Below is a great Tik-Tok costume from 1982, this one designed and worn by Dick Rutter. He was really into paper-mache - which, by the way, is inexpensive and effective!

Some costumes are very unexpected - such as this awesome Kabumpo the Elegant Elephant from Kabumpo in Oz, worn by a teenage Eric Shanower and his sister Elizabeth. Yes, that's future Oz author, illustrator, and award-winning comics creator Eric Shanower!


Also seen (left to right) are authentic costumes for Ozga the Rose Princess, Queen Ann of Oogaboo, and Private Files. These three are also characters from Tik-Tok of Oz and would be great costumes for this summer!

So look at all the fun you could have! Get started, make it a project, have some crafty fun! Look how excited these three Patchwork folk were at last summer's Winkie Con! Heck, you might even win one of the costume prizes! These prizes include Best Adult Costume and Best Child Costume, as well as the above-mentioned Best Theme Costume which includes a $50 cash prize.


My all time favorite Oz costume was Dick Rutter as Quox the Dragon, from Tik-Tok of Oz (seen below). Quox was about 12' long. He could crawl about (I think there was a skateboard under his abdomen to help him along)  and there was a fire extinguisher built into his snout and he belched smoke a couple times! Quox was pretty amazing! In this photo he is surrounded by a couple Winged Monkeys, the Wicked Witch of the West, and Ozga the Rose Princess.

Join us for this year's Winkie Con 50, August 8-10, 2014 at the Town and Country Hotel and Convention Center in beautiful San Diego. Click here for the Winkie Con website. The 2014 Costume Contest will take place on Saturday morning, August 9, 2014 - though you are welcome to wear you costumes as much as you like! 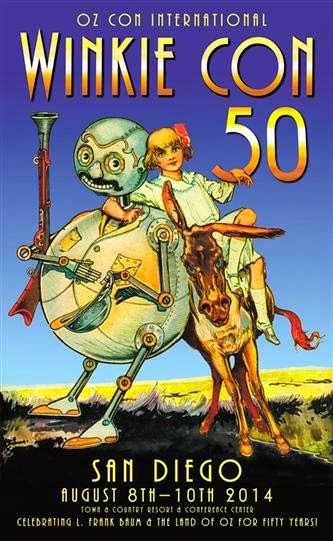