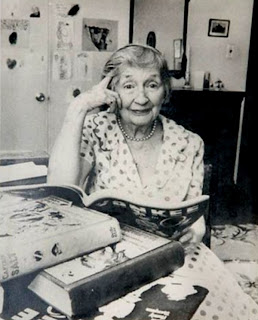 In today's blog we have a recipe from Ruth Plumly Thompson for Popcorn Globes! The recipe was originally published in Thompson's children's page for the Philadelphia Public Ledger.


The Cooking Class
by Ruth Plumly Thompson
Every doll and every doll mother loves to pop corn - why, even grown-up ladies and gentlemen like to. It is such fun watching the little hard kernels suddenly pop into little soft white balls - for all the world like Cinderella when the Fairy Queen waved her wand, and her old rags turned to beautiful silks and satins.

And after it is popped, here is the very loveliest way to fix it - so that it will taste every bit as good as it looks.


Popcorn Globes
Place three quarts of popped corn in a large pan. Then melt one tablespoon of butter in another pan and add one cupful of molasses and one-half cupful of sugar. Boil until it becomes hard when dropped into cold water

Then sprinkle the popcorn with salt and pour the hot syrup over it, stirring constantly. When cold enough to handle, shape in round balls, pressing as lightly as possible.
Posted by David Maxine at 8:00 AM