Another Hungry Tiger in Oz

How are Oz and The Prince of Tides connected? No, this isn't another game of Oz Connection--I'm going to tell you the answer. Although, if you read this online article about Carol Conroy, sister of The Prince of Tides author, you might be able to figure it out.

If you zeroed in on the names Pamami Press and Mike Riley in that article, you're on the right track. Of course, in Oz circles Michael O. Riley is known primarily for two things--as the author of Oz and Beyond, a seminal study of Baum's fantasies, and as the face of specialty publisher Pamami Press, which issues high-quality art editions of short works by L. Frank Baum.

In addition to works by Baum, Pamami Press also published the first book collection of Carol Conroy's poetry, The Jewish Furrier. Carol's brother Pat Conroy, the novelist, based the character of Savannah Wingo in his 1986 best-selling novel The Prince of Tides on Carol. Pat planned to include Carol's poem "The Jewish Furrier" in the book, but Carol objected, so Pat wrote a new version for The Prince of Tides.

Meanwhile, Pamami Press is still producing new publications for Oz and Baum fans everywhere. The most recent book publication was L. Frank Baum's essay Fairy Tales on the Stage. And in its series of exclusive keepsakes for Winkie Con attendees, Pamami Press issued a booklet of Baum's "The Rainbow's Daughter" at the 2012 Winkie Con

Here's another article about Michael Riley and Pamami Press, which goes into detail about the painstaking process each publication takes. And if you ever wondered how to pronounce Pamami, it's like your parents--"Pa" and "Mommy." Put 'em together and you've got it!

Happy February! We have an especially attractive TIGER TALE this month over on the main website - it's  Duffy's Apple Juice Imp, by W. W. Denslow - a rollicking poem with a half dozen fine drawings by Denslow in color! Come check it out! 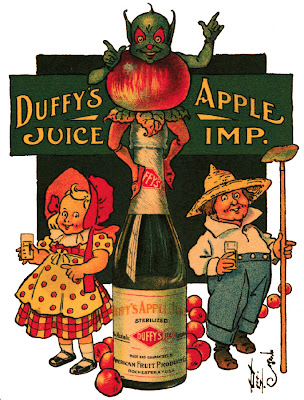 I also wanted to share the news that the incredible and extremely over-sized edition of Eric Shanower's Forgotten Forest of Oz is now out of print. We shared the news on our Facebook page last week and every copy we had left sold in a couple hours.  We do still have copies of the two Little Adventures in Oz Volumes though - and Forgotten Forest is available in Volume two. Click here to order a copy

Lastly, I know a good many of you are still planning on coming to this summer's Winkie Convention and I urge you to get your registrations in as soon as possible - especially if you want to stay on-grounds at Asilomar. We have a lot of new people coming this year and we have a limited opportunity to request more rooms for Winkies. You can learn more about this year's con from our WINKIE page and you can download info and registrations forms via the link below.