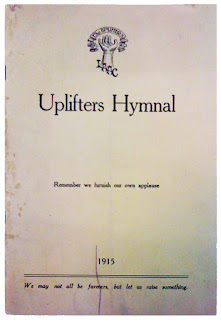 Has anyone noticed that I haven't been blogging quite as much as I used to? Well, what with Comic Con, the Winkie Convention, a variety of house guests, and a three week, eight thousand mile road trip - who's had time! Excuses, excuses ... 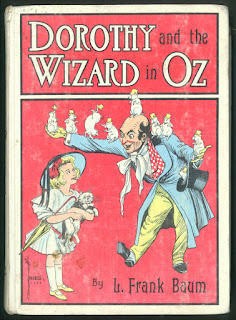 Well, now that that's out of the way, what better way to get back into the thick of things than with a good old-fashioned White Edition Wednesday post! One of the things Eric and I did on the road trip was scour antique malls and junk shops and little grungy bookstores. At one of the first shops we stopped at I spotted a few "white editions." One of them was a copy of Dorothy and the Wizard in Oz - the oddball variant where Reilly & Lee bound up their leftover 1950s text blocks in "white edition" covers. There are a fair number of these floating around, but I had never actually examined one. I bought it, of course, and I was surprised to see it had blank endpapers, not the usual Road to Oz endpapers. No one who reported to me on this variant even mentioned the lack of illustrated endpapers, so I don't know if this is a new variant or if my bibliographical elves simply didn't notice a lack of illustrated endsheets in their copies.

So, Ta dah! Still another "White Edition" variant!  You'll be getting a number of other reports on my travel finds in the coming weeks, so stay tuned.