If Ever, oh Ever, a WIZ There Was 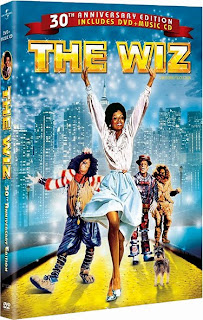 The film version of The Wiz is probably few Oz fans’ favorite film. Yet in 1978 the release of the film was very exciting. The Wiz was the first major-studio Oz film since the 1939 MGM Wizard of Oz as well as a film version of a mega-hit Broadway musical of the same name. But despite the record-breaking twenty-seven million-dollar budget, the film flopped in the United States (it did very well in France) and it flopped even bigger with most Oz fans.

Critics have often blamed the failure of this film on the casting of thirty-four year-old Diana Ross to play a twenty-four year-old Dorothy. They have blamed the choice to set the entire film in a nightmarish New York City-inspired fairyland. But the real villains in the film version of The Wiz are not Diana Ross’s Dorothy or the multiple green Chrysler Buildings, but Joel Schumacher’s illogical and anti-musical script and Sidney Lumet’s direction.  Neither Schumacher nor Lumet seem to understand how a musical works as a drama; and on this film they each continually mistrust - and in the end sabotage - their material.

Why does Aunt Em sing “The Feeling We Once Had” to a cousin of Dorothy’s who doesn’t even have a speaking part in the film? It should have been a tender moment between Aunt Em and Dorothy. Why discard the Scarecrow’s “I was Born on the Day Before Yesterday” (explaining the Scarecrow’s origin) for a new song, “You Can’t Win,” which tells us nothing about the Scarecrow and instead serves solely as a pop song for Michael Jackson. Why did Lumet cut all of the Wizard’s music? “So You Wanted To Meet the Wizard” could have been an eye-popping showstopper halfway through the film. The Wizard’s version of “If You Believe” was also cut. Presumably Richard Pryor, who was cast as the Wiz, couldn’t sing - but if one simply must cast Richard Pryor, one could always dub him, no?  When Lumet eliminated all of the Wizard’s songs and Schumacher wrote a script where the Wizard is no longer even the person to present the Scarecrow, Tin Man, and Lion with their just rewards, well, the Wiz himself becomes rather superfluous. Viewers cease to care, and in the end, the film falls apart.

There are certainly a few good moments. The film preserves Ted Ross’s Tony-Award winning Broadway performance as the Cowardly Lion. And Mabel King (also from the original Broadway cast) offers up a fabulous performance as Evillene, the Wicked Witch of the West. Michael Jackson is entertaining and empathetic. He does a fine job only a couple years before he became a superstar.

But so very much doesn’t work at all. Why does the Emerald City turn red and then gold?  Lumet obviously wanted to put over the idea that the Emerald City is populated with a gaggle of empty-headed, fashion-following hipsters, but couldn’t find a way to do it without violating the story. We get the same mediocre production number three times in three colors, two of which are not green. The New York City joke about not being able to catch a cab is badly overused. Why does the Cowardly Lion live in a statue? What does it mean that Glinda seems to have created the blizzard that blew Dorothy to Oz? Why did Lumet think it clever to have the Wiz unmask himself to the audience by peeking out of the giant head as Dorothy and her friends set off to kill Evillene? It is dramatic mistakes like this that sank the film version of The Wiz. Not even the few lovely moments - Dorothy singing “Be a Lion” to the crying Lion, the second half of “Brand New Day,” and Dorothy singing “Home” at the end - can save the film from the blizzard of confusion wrought by Lumet and Schumacher.

Which brings us to the latest 2-Disc Thirtieth Anniversary DVD edition of The Wiz. The DVD comes in a typical plastic snapcase with a thin cardboard slipcover. Both are adorned with new artwork. The slipcover has the added spiffiness of yellow glitter for the title lettering and silver glitter for Dorothy’s silver shoes. The Emerald City is printed over a holographic green background adding still more pizazz to the packaging.

The contents of the DVD itself are not quite as pizazz-filled. The film has supposedly been “Digitally Remastered for Optimum Picture Quality,” yet it is only marginally better than the previous DVD reissue. I compared multiple scenes, multiple times, and found little difference. The new DVD is perhaps a little brighter and sharper - but not much. The colors are muted and sometimes downright drab, an example being the green-apple sunrise over the Emerald City. This scene was stunning in the movie theatre - the Emerald City even looked green as I recall. In this DVD release the predominant color seems naturalistic cityscape gray.  The Munchkinland scenes are very dark. During much of the “He’s the Wizard” production number it is hard to see any of the detail. Granted it’s a dark scene - but it should be saturated blues and show some subtlety - here it is just dark and murky. The remastered sound is quite decent. I was not able to play the sound in a 5.1 Surround Sound setup, but  running it through my two-channel stereo sound system it sounded vibrant and fresh and as good as ever. The film comes with an alternate French language track, and English and French subtitles.

The “Special Features” include a 1978 featurette called "Wiz on Down the Road," which runs about ten minutes. While it is mostly a typical publicity piece, it does include some interesting behind-the-scenes footage. Also included is one of the less-interesting theatrical trailers for the film. I was hoping this DVD would include the “History of Oz” Wiz trailer that began with a shot of a George M. Hill edition of The Wonderful Wizard of Oz and quickly worked through a history of Oz on stage and screen before exploding into the colorful, soulful “brand new Oz!” That much more interesting trailer was written by Oz club member and Oz film historian Aljean Harmetz. It’s a shame they didn’t include it. The extra disc in this set is a music CD featuring eight songs from the soundtrack. The selected tracks give a good sampling of the score, but many songs are omitted and none of the orchestral music is included. Indeed the eight tracks don’t even really function as a simple retelling of the story since such choice numbers as  “The Feeling We Once Had,” “Soon as I get Home,” and “No Bad News” are not included.

This DVD release is certainly a satisfactory preservation of the film. But as a Thirtieth Anniversary celebration its charms are limited.
Posted by David Maxine at 5:29 PM