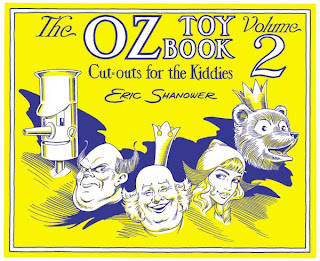 The very first book produced by Hungry Tiger Press (way back in 1994) was The Oz Toy Book Volume 2, a book of Ozzy cut-outs drawn by Eric Shanower. The original Oz Toy Book was a similar cut-out book drawn by John R. Neill. It was published by The Reilly and Britton Co. of Chicago in 1916. That original Oz Toy Book is a super-rarity of which only a handful of copies are known to survive.

Anyway, back in 1994, while Eric Shanower and I were pondering a good book to start our fledgling publishing company with, we came up with the idea of creating a sequel to the original Oz Toy Book. It would include Baum's Oz characters that were created after 1916 as well as some favorites from the later Oz books of Ruth Plumly Thompson and Jack Snow. We also added one page of supporting characters from The Wizard of Oz that Neill had not included, as that book was not in Reilly and Britton's catalog.

Eric Shanower drew over forty characters spread onto 14 pages, which we had printed on card stock and bound with a cover printed in blue. The book sold very well and those sales helped fund our first serious project, Oz-story Magazine.

Our Oz Toy Book has been out of print for more than a dozen years. However, while going through some old boxes here in the Tiger Den, I recently found a stash of unbound pages from the book. Thinking it might make a nice curiosity for our booth at Comic Con, I collated all the pages and made a new cover using Eric's original hand-drawn color separation. Eric had originally designed the cover to be printed in yellow and blue. But our printer in 1994 couldn't handle the job and we eliminated the yellow from the final design. So these two dozen Comic Con specials are the first to feature Shanower's cover as originally imagined!

So now I had a couple dozen unbound "portfolio style" copies of The Oz Toy Book Volume 2 and I took them with us to Comic Con this last weekend. As it turns out I have a VERY FEW copies left. If you are interested in having one these last copies, they are now available (until supplies run out) in our on-line store. Here's your chance for some Ozzy fun. 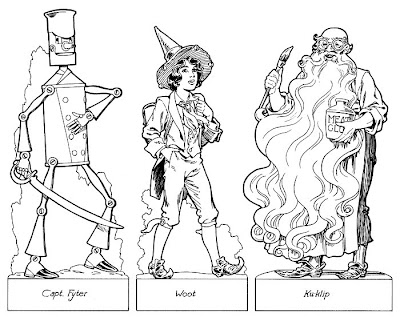 Oooh, wish I could get this one, but Winkie Con left me a little tight for a bit...

Though, thanks for donating some cut outs for the crafts room! I managed to take some time out and colored Trot, Cap'n Bill, and the Good Witch of the North. I would have loved grabbing more, but there was only two of each, so I tried not to be greedy, a decision I regretted as the rest were left uncolored and were just picked up.

*Phew!* Anyways, I hope this one isn't kept so rare in the future! Eric did some great work there! I had to do a double take to realize they weren't from the Club's edition of the original Toy Book!

Will this ever be available again for purchase or at least download? They look like they'd be so much fun to color.

I shall certainly consider it :)