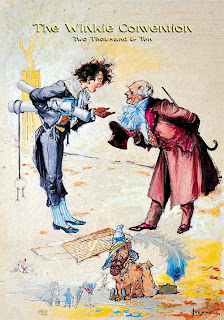 Begun in 1964, the Winkie Convention is the longest running Oz convention. This year's convention celebrates the 100th anniversary of the publication of Baum's sixth Oz book, The Emerald City of Oz (1910). This year's presentations include several by the Baum family; a marvelous presentation by Atticus Gannaway on Oz illustrator Frank Kramer, detailing Kramer's involvement with the 1940s fantasy magazine Unknown Worlds; a Collector's Roundtable on the 1985 Walt Disney film Return to Oz; a presentation of John R. Neill's illustrations for The Emerald City of Oz; a  Powerpoint talk by Robert Baum on Baum's early aviation novel The Flying Girl; plus all the Winkie Con favorites such as the Treasure Hunt, the Costume Masquerade, the Winkie Quiz, and lots of Ozzy camaraderie.

Once again for this year Hungry Tiger Press has prepared the official Winkie Convention Program Guide. It is a 140 page book of essays, illustrations, and additional reading material for the convention. The best way to make sure you get a copy is to go to the Winkie Con! It's not too late - drop-in visitors are welcome, too!


Here is a link for downloading a PDF of the info packet and registration form!
http://winkies.oogaboo.org/WinkieConvention2010Registration.pdf

http://winkies.oogaboo.org/news.html
Posted by David Maxine at 8:00 AM