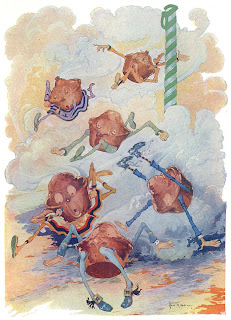 In L. Frank Baum's sixth Oz book, The Emerald City of Oz, Dorothy Gale and her entourage visit Bunbury, a village of living baked goods. Dorothy is rather hungry and wonders if the tasty citizens of Bunbury might find her something to eat:


Then a big, puffed-up man, of a delicate brown color, stepped forward and said;

"I think it would be a shame to send this child away hungry, especially as she agrees to eat whatever we can spare and not touch our people."

Well, things go down hill pretty quickly after Toto eats several of Bunbury's citizens. But in today's blog you can sample a genuine Bunbury treat by following L. Frank Baum's recipe for Popovers!

Baum's granddaughter, Ozma Baum Mantele, wrote, "Grandfather Baum liked to cook, as did my father [Kenneth Baum], who used to say that breakfast was a favorite meal in their house. On Sunday mornings we always had meat for breakfast, such as pork chops, lamb chops, lamb kidneys sauté (a particular favorite), plus popovers, another favorite. According to my father, these were favorites of his father." So here we present L. Frank Baum's very own popovers!


Popovers
A recipe by L. Frank Baum
Grease six custard cups and place in a 450 degree oven. Beat two eggs, add one cup milk and one tablespoon cooking oil. Add one cup flour and one-half teaspoon salt. Beat until smooth. Half fill hot custard cups. Bake 25 minutes, then reduce heat by 100 degrees and bake fifteen minutes more, until firm. Prick each popover before removing from oven to allow steam to escape. Serve hot.
Posted by David Maxine at 10:34 AM

Would that be plain or self-rising flour?

It would be plain old all-purpose flour - the eggs will do the work for Mr. Baum's Popovers.