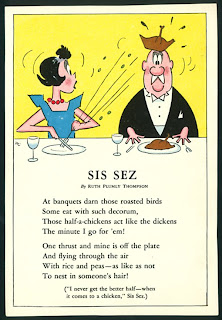 Last week I mentioned Ruth Plumly Thompson's many years' work as editor of King Comics. In addition to her monthly short story, letter to the readers, and Pet Post, she also did a monthly feature with her protegé, illustrator Marge (Marjorie Henderson Buell), the creator of Little Lulu. Thompson and Marge had struck up a friendship while Thompson was working on the Philadelphia Public Ledger and Marge was a teenager hoping to become a cartoonist.

The full page feature was called "Sis Sez" and featured a short poem by Thompson with an often snarky aside to the reader tagged on at the end. Each poem was illustrated by Marge in full color. Almost every issue from No. 5 in August 1936 through No. 61 in May 1941 featured two pages of "Sis Sez."

Sis is a young single woman, probably in her late teens, trying to make her way in the world. She dates, she has jobs, she has problems with her relatives, she's a normal young woman of the late 1930s. The feature's five year longevity makes one wonder who these comic books were targeted to in the late 1930s - quite probably the entire family, just like the comics section in the newspaper. Dad reads some strips, Mom others, Junior likes one thing, little sister something else. A truly all-ages, all-gender magazine.

This "Sis Sez" was published in King Comics No.34 in January 1939. But this image is taken from a series of King Comics "proof sheets" that were printed on very white coated paper. So take a minute and introduce yourself to Sis, you just might be seeing more of her on coming Sundays.
Posted by David Maxine at 9:53 PM

I've always been a fan of Little Lulu but other than her name, I never knew anything about her creator, Marge. I had no idea she was a protegé of Ruth Plumly Thompson. I really enjoyed the "Sis Sez," piece in this post. Thanks for posting it, I hope you will post more of them in the future.

For Mr. Desjardins, the Schlesinger Library in the Radcliffe Institute now has a lot of material on Marge because her son, Harvard professor Lawrence Buell, donated it a few years back. Here are two links.

As for the early audience for comic books, one of the Fawcett executives behind Captain Marvel recalled a survey in late 1939 showing that boys were the main audience for superhero comics, driving the market. That news inspired not only the Big Red Cheese, but Robin the Boy Wonder and a gaggle of other juvenile heroes and sidekicks introduced in 1940. Apparently there hadn't been much market research before then, and publishers probably were indeed following the model of newspapers' comics sections.

Thanks, John - Most interesting!