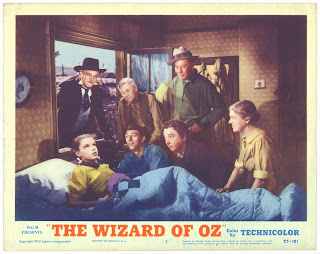 I was looking through some Oz stuff here in the Tiger Den and ran across a set of lobby cards from the 1955 release of the MGM Wizard of Oz. I only have four of them; there were eight in the set. All eight lobby cards feature black-and-white photos that have been rather crudely colored. The colorist seems to have had no idea what the film looked like. Dorothy wears a yellow and red dress and the ruby slippers are sort of blackish. This color-tinting technique was used on many lobby cards of the era. Oddly, the 1939 lobby cards were colored much more accurately. The images for the 1955 set were first used in 1949. 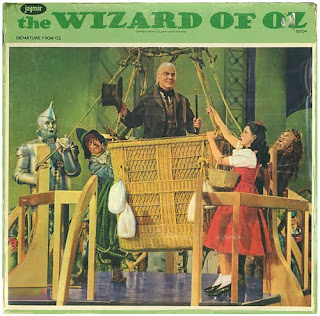 The most interesting of these photos is the last one (above) as it shows Dorothy waking up in Kansas in color, one of the scenes that's supposed to be in black-and-white.

These images were also used in various MGM licensing over the years, as can be seen here in a jigsaw puzzle produced by Jaymar in the late 1960s.
Posted by David Maxine at 8:00 AM

I know - who does she think she is? Little Orphan Annie?