Before the Rainbow - Designer Dilemmas 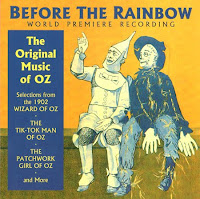 One of the most enjoyable parts of owning Hungry Tiger Press is designing the books and CDs. One of my favorite projects was designing the label for our first compact disc, Before the Rainbow; The Original Music of Oz, back in 1999. The CD is a collection of very rare Oz music and included a suite from the 1903 Wizard of Oz, long medleys from The Woggle-Bug and The Tik-Tok Man of Oz,  music from the 1913 film score for The Patchwork Girl of Oz,  and even music composed by L. Frank Baum himself for his plays The Maid of Arran and Prince Silverwings.

The booklet design was pretty straightforward. I used a 1903 poster featuring Montgomery and Stone as the Scarecrow and Tin Woodman for the booklet cover. I pulled an illustration of Tik-Tok from the more common red background Tik-Tok Man of Oz sheet music for the back cover of the booklet. And I used a photograph of the Cowardly Lion from the 1903 Wizard for the back of the CD case. 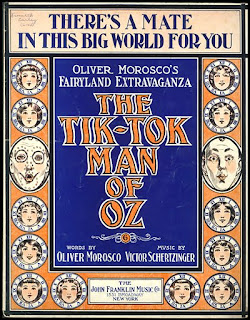 But I was stuck for what to do with the design for the actual disc itself. I've always liked CDs to be decorative, not just typography on the shiny silver disc. But CD label design is a little tricky. It's like designing a picture and typography that have to be printed on a doughnut. I looked through all of my notes and the assorted sheet music. Then I came across the alternate Tik-Tok Man of Oz sheet music cover that was used for Victor Schertzinger's interpolations.

"Hmmm," I thought, "too bad that decorative orange border isn't round . . ." And  instantly I saw the finished label design in my head. I scanned the sheet music and dropped out  the color, thus turning the image into a clean black and white illustration which I printed out in several sizes. I got out a piece of illustration board and my trusty compass and began to draw a number of concentric circles in the proportion of a CD label.

I cut out the faces of Tik-Tok and the Shaggy Man from my print-outs and positioned them on the right and left sides. I also cut out four of the the little "clock face" girls and positioned them, leaving room at the top for the title of the CD and at the bottom for credits and the copyright notice. The penciled circular lines were inked in and the new image was scanned back into the computer. The CD label was to be silk-screened onto the discs, and I was limited to two colors, so I picked a navy blue for the line art and made a second layer of color for the orange background in the top and bottom sections. I added the desired typography to the blue layer and at the last minute added an orange tone into the circles with the "clock face" girls. 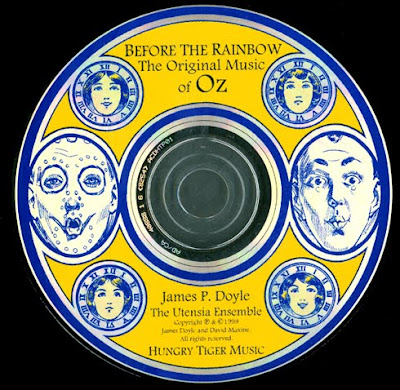 I like to think it was a subconscious design choice, but it might have only been serendipity, that my orange and blue CD label so closely matched the orange and blue color scheme of the poster I had already used for the CD booklet cover. In any case, I was very proud of the look of my first compact disc.

The CD has been out for eleven years now and there are only a handful of copies left. If you don't already have one, this is a great time to check it out.


Before the Rainbow - The Original Music of Oz
Posted by David Maxine at 9:55 PM

Due for a new listen.

am wonderingis this the smae music on your two disc set you did that a freind of mine gave me or should i get thisone as well?

Hi Charlie - the recordings on this CD are totally different from the 2 CD VINTAGE RECORDINGS set.

The BEFORE THE RAINBOW recordings do not have vocals and they were created by a synthesized orchestra using original orchestra parts. But this is the only place you'll find music composed by L. Frank Baum and the score to the PATCHWORK GIRL film.

Oh. I see. Different stuff. Didn't realize. Well! Did think that design looked less than familiar. Will have to buy this then, won't I?

I dig through sheet music in antique shops, always hoping to run across one of these beautiful pieces. Any chance Hungry Tiger might think about producing posters from these sheets from Tik-Tok Man, or the 1902 Wizard for that matter? There are a few such things out there, but they tend to be cost-prohibitive. I have no idea about the expense of producing such a thing -- but it's a little dream of mine!

I'm also wishing for a reproduction of a Montgomery-Stone Oz poster, that shows the Scarecrow and Tin Man in a "shoulder-hug." I've seen it in "The Wizard of Oz Collector's Treasury" (Skillman/Scarfone) but I can't even come up with it on google. Any thoughts? I'd love to have a print...

Thanks, Chris - I much appreciate hearing ideas from people. We'll see what we can do.