Kayaking with Trot and Cap'n Bill

As most Oz fans know, L. Frank Baum had a close connection to San Diego from 1903 until his death in 1919. He vacationed at the lovely Hotel Del Coronado for many years, he boated in the area, and he used the greater San Diego area in some of his best children's books—ever more wonderfully than when he made La Jolla the home of Trot and Cap'n Bill.

They live on a bluff overlooking the Pacific Ocean and it is in one of the La Jolla sea caves that Trot and Cap'n Bill encounter the mermaids in The Sea Fairies (1911) and off the La Jolla coast that the twosome start their journey to Oz in The Scarecrow of Oz (1915).


So what could be more fun than to relive Trot and Cap'n Bill's experiences and take a kayak tour of the very sea caves they explored a hundred years ago?

Now - I'm guessing that most of your reactions are kinda like mine was when my partner Eric Shanower suggested that we do this very thing about a year ago. I thought "Cool! Neato!" followed by "Uhm ... me? In a kayak? On the ocean? Eric, I think I might be allergic to kayaks."

But it looked like fun, and I didn't want to seem too wimpy, so I did it. I'm forever glad I did, too, and I've now gone back and done it a second time. It was so easy and so much fun that I decided to offer it as an "optional" activity at the 50th annual Winkie Con in August 2014.

So I want to show you all the fun you can have and to alleviate any fears or concerns. First off, most anyone can do it. I've seen kids on the tour as well as elderly and somewhat chubby grandmas. So let's take a virtual kayak trip! Come on, it's gonna be great!

After you check in at La Jolla Kayak you can change into clothes you won't mind getting wet - shorts and a lightweight shirt. Also take the time to put on a good sun screen. There are lockers to stow your clothes, valuables, and shoes. You'll choose a life vest and safety helmet, and then it's a three-minute walk to the beach with the helpful tour guide.

Most people choose to row in a double, so there are two people in each kayak. The kayaks are hollow, molded plastic. I don't think you could make one sink if you wanted to! Once at the beach you'll get a quick and easy lesson in how to maneuver your kayak.


And we're off! Eric brought along some sunglasses. If you wear glasses you should bring along a cord so there's no danger of them falling off. You can also bring along a water-proof camera! 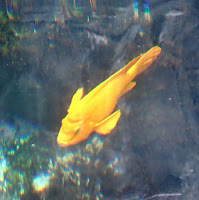 In general the water is incredibly smooth. Often it's really clear, too, enabling you to see a lot of incredible wildlife, including this large orange fish. Queen Aquareine and the mermaids generally try to stay out of sight. But on really clear summer days you can sometimes catch a glimpse!

There are also many birds: brown pelicans, seagulls, and cormorants, though I have yet to spot any Orks on this tour. But there are always a lot of sea lions! Seeing them in the wild sure beats seeing them at the zoo!

There are seven main sea caves. One of them, the Sunny Jim Cave, was (according to local legend) named by L. Frank Baum! I'll post another blog soon on all that! 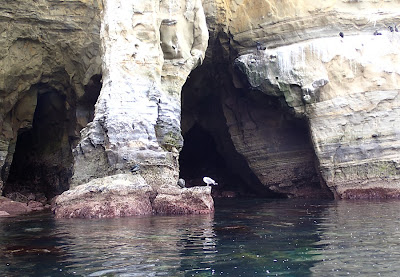 Almost always you'll be able to row into one of the sea caves and really see where Trot and Cap'n Bill found their way to Oz! No sign of a gateway to Oz, but the cave does smell a bit like Ork!


And then it's time to row back to the shore! The whole tour takes about ninety minutes to two hours. It's lots of fun - and despite my initial worries about kayaking, it was fun and easy - and most importantly we had an Ozsome time!


Click here to register for Winkie Con 50
and to buy a ticket for Trot and Cap'n Bill's Sea Cave Tour!


The kayak tour will be led by La Jolla Kayak, but tickets must be purchased through the Winkie Con either online or by post. The tour will take place on Friday morning (probably around 9:00AM) and will run about ninety minutes. We will probably carpool to get to LaJolla from the convention hotel. Specifics will be sent to the attendees as we get closer to the convention.
Posted by David Maxine at 2:23 PM No comments: 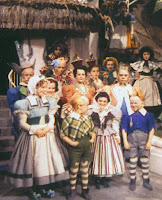 What do you think the chances are that David Maxine and Eric Shanower are both related to a Munchkin actor from the 1939 MGM Wizard of Oz? If you answered 100%, then you're right. Click here to read the full story of this surprising and heretofore unknown relationship:


The Over-the-Rainbow Connection
Posted by David Maxine at 7:56 PM No comments: