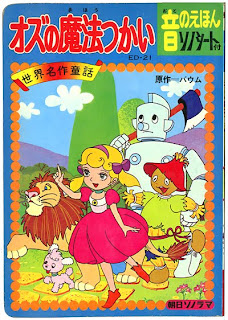 Foreign translations of the Oz books are another passion here in the Tiger Den. The widely varying illustration styles are one of the big draws. In general, foreign illustrators are not nearly as influenced (or ham-strung) by the MGM Wizard of Oz film as American illustrators often are.

Oz has been especially popular in Japan, and this little picture book is a favorite. This edition of The Wizard of Oz - translated as Ozu no Mahoutsukai - was published by Asahi Sonorama of Tokyo in 1980. The translation and adaptation are by Atsuko Nakamura and the illustrations are by Satoru Inoue.

This picture-book Wizard contains only twelve pages and most of them are double page spreads, many of which are quite attractive. The style is a bit cartoony - not quite Anime. I especially like the Tin Woodman. I'm not fond of the Dorothy - but pink poodle Toto is kind of a hoot! I especially like the spread for the fight with the Kalidahs (shown below).

Another cool thing about this edition is that it includes a small phonograph record (playing time about fifteen minutes) of the story, using different voices for each character and with charming little Oz songs sung in Japanese. 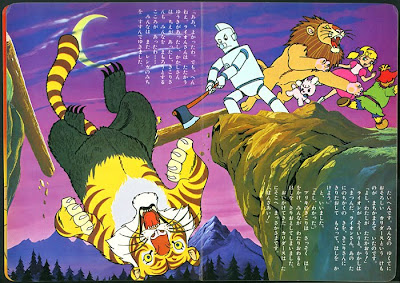