The Lost Illustrator of Oz 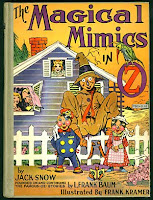 The 46th Annual Winkie Convention of the International Wizard of Oz Club will be taking place at Asilomar Conference Center in Pacific Grove, California, from July 23rd to 25th, 2010.

One of the highlights this year is a presentation by Atticus Gannaway called Frank Kramer - The Lost Illustrator of Oz. Kramer, as most of you know, illustrated Jack Snow's two Oz books, The Magical Mimics in Oz (1946) and The Shaggy Man of Oz (1949). Aside from a very short bio in Snow's Who's Who in Oz (1954), almost nothing has been published on Kramer or his illustration work. But Gannaway has spent several years researching Frank Kramer and discovered a wealth of information on Kramer, his non-Oz illustration work, and how Jack Snow found him and brought him to Oz. 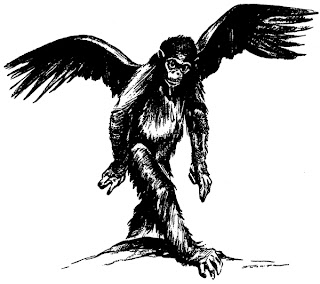 At right is an illustration of a suspiciously Ozzy-looking winged monkey drawn by Kramer for the pulp fantasy fiction magazine Unknown Worlds in 1939, seven years before Kramer illustrated an Oz book.

If you'd like to see Atticus Gannaway's presentation on The Lost Illustrator of Oz and learn more about Frank Kramer, Jack Snow, and how Kramer came to be an Imperial Illustrator, I suggest attending the 2010 Winkie Convention!

To learn more about the Winkie Con you can subscribe to the Winkies' monthly e-mail newsletter and download the Registration Materials for this year's convention.


SUBSCRIBE to the Winkie Con e-mail Newsletter
Posted by David Maxine at 9:12 PM