Wizard Goes to the Eisner Awards

Last week we promised you a report of how Marvel Comics’ adaptation of The Wonderful Wizard of Oz won big at the 2010 Eisner Awards ceremony. Now here's that report in the words of the project’s writer, Eric Shanower: 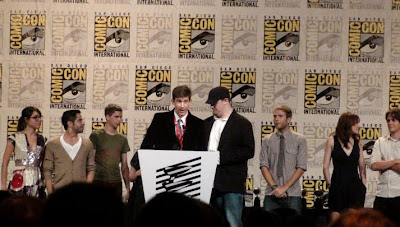 On the evening of Friday, July 23, 2010, the 22nd Annual Will Eisner Comic Industry Awards were presented in a ceremony at San Diego Comic Con International.

Skottie Young and I were both present at the ceremony. Our project for Marvel Comics, an adaptation of L. Frank Baum’s The Wonderful Wizard of Oz, had been nominated in two Eisner Award categories: Best Publication for Kids and Best Limited Series or Story Arc. We thought we had a pretty good chance to win Best Publication for Kids. But the other nominations in the Best Limited Series category included very popular works by high profile comics creators. The chances of winning in that category seemed so remote that it almost wasn’t worth thinking about.

The ceremony took place in the Indigo Ballroom of the Hilton Hotel, adjacent to the San Diego Convention Center where Comic Con International 2010 was taking place. Skottie Young, David Maxine, and I were seated with, among others, Dean White, Shannon Wheeler, Sean Phillips, and Duncan Fegredo at a table for nominees in the VIP section of the ballroom. After the customary buffet dinner, I got up from the table to get another drink. Skottie asked me to get one for him, too. The line at the bar was pretty long, but I figured I had plenty of time, since the ceremony hadn’t even begun. But it got underway as I was waiting to reach the head of the line. The emcees were introduced. The cast of the forthcoming Scott Pilgrim movie came onstage to announce the first several awards. I was getting closer to the bar. The first category of the evening was Best Publication for Kids, for which Wizard was nominated. I gave my drink order to the bartender and as she was pouring the drinks, the nominees for the Kids category were being announced. As I paid, the winner was announced: The Wonderful Wizard of Oz. Whoever was behind me in line said something like, “That’s you!” I grabbed my change and the drinks, rushed back to the table, set the drinks down, threw the change after the drinks, and hurried with Skottie up to the stage.

I accepted my Eisner statue from an actor from the Scott Pilgrim movie cast, but I have no idea who she was. I guess I’ll have to see the movie at some point in order to figure it out. Skottie and I each said a few words, got our official photos taken, and - back at the table - decided that we could relax for the rest of the evening, since winning in the other category, Best Limited Series, seemed like such a long shot.

Another project I’d been involved with also had two nominations. Queer Visitors from the Marvelous Land of Oz by L. Frank Baum and Walt McDougall, published by Sunday Press, was nominated for Best Archival Collection/Project-Strips and for Best Publication Design. This oversize, meticulous reprinting of Baum’s Oz newspaper stories didn’t win in either category. I’ll have to content myself that at least it was nominated and that it was really neat to see L. Frank Baum's name up on the screen for work that he created over one hundred years ago. Still going strong! 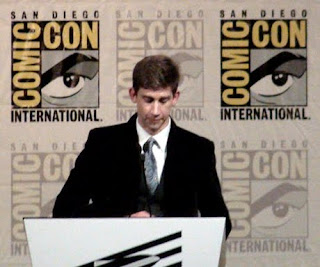 I had one more duty at the Eisner Awards ceremony. As a past winner of the Russ Manning Most Promising Newcomer Award, I was presenting this year’s Russ Manning Award to Marian Churchland. Marian wasn’t in attendance, so Marley Zarcone accepted the award for her. That went smoothly.

The Best Limited Series or Story Arc was the penultimate category. I was so tired by that point - after two and a half days at the Hungry Tiger Press exhibit booth and a loooooooong awards ceremony. It wasn't till halfway through the announcements of the Best Limited Series nominees that I even remembered that Wizard was nominated. I was applauding the other nominees and telling myself to stop applauding when Wizard was announced because it's just not polite to applaud oneself. Then I immediately forgot and kept on clapping when the presenter, Dave Gibbons, got to Wizard, last on the nominee list. David Maxine and Skottie Young both said later that the sudden burst of audience applause when Gibbons announced the nomination of Wizard clued them in to what was about to happen. But I was clueless, embarrassed that I was applauding for my own project. When the award went to Wizard, Skottie and I could hardly believe it. Wins in both categories we were nominated in. Wow!

I'm so thankful to all the people connected with the Oz comics we're doing for Marvel: all our editors - particularly Nate Cosby, Ralph Macchio, and Mike Horwitz; colorist Jean-Francois Beaulieu; letterer Jeff Eckleberry; the production and marketing people and everyone else at Marvel; and David Gabriel, Marvel Senior Vice-President of Sales & Circulation, who basically is the impetus behind the whole thing. And especially to Skottie Young, whose wonderful art is really the driving force behind the popularity of Marvel's Oz.


- Eric Shanower
Thanks for the report, Eric. Hungry Tiger Press displayed the Eisner Award statues at its exhibit booth for the rest of Comic Con International.
Posted by David Maxine at 8:00 AM