The Original RETURN TO OZ 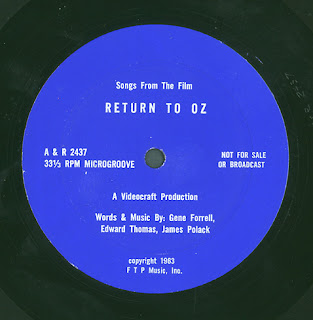 I especially love finding Ozzy things that I didn't previously know existed. This 12" LP recording was certainly a surprise. It is an album of all the music from the 1964 Rankin Bass Videocraft Production of Return to Oz. This animated television feature was released as a follow-up to the short-lived Tales of the Wizard of Oz television cartoon series.

The record was produced for internal studio use and was seemingly distributed to the production staff only. The record label says "Not for Sale or Broadcast" and has a copyright date of 1963, the year before the film was broadcast. The record has music on only one side and the back is blank, containing neither label nor sound. The copyright is to FTP music, Inc., the initials of the three songwriters: Gene Forrell, Edward Thomas, and James Pollack. 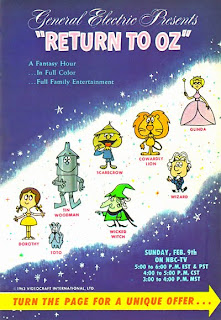 When I re-watched the film recently to compare the film score to the newly acquired LP, I was surprised by two things. First, the film was better and much more enjoyable than I had remembered. The early 1960s design and animation has a charming retro feel to it now, instead of just looking cartoony and cheap, as I'd remembered it.

The second surprise was that the LP features a song that was not used in the final version of the film called "I'm a Wise Old Wiz of a Wizard," which is sung by the Wizard, of course. Otherwise the music on the record matches the music for the film. It's a neat little record.

I'd had no idea there'd been a release of the music from the original "Return to Oz." I made my own "soundtrack" from the DVD, the songs are silly but very enjoyable. (Particularly "The Wonders of Oz" song, which I got a friendly Scotsman to cover.)

I'm also surprised that there was a deleted song from the film! Sony, why, oh, why didn't you dig this up for the DVD as an audio-only feature?

Some Oz fans have vehemently declared their hatred for the film just because it's a thinly veiled re-working of "The Wonderful Wizard of Oz" as a sequel to itself. I, on the other hand, decided to take it for what it was, and what it is is simply a treat.

I had no idea about the cut song either. Many DVD producers seem to have limited imagination and research skills.

I used to rather dislike the film but it really has a lot of retro charm. I think people also get it confused with TALES OF THE WIZARD OF OZ and OFF TO SEE THE WIZARD and half the time don't even know which film they're dissing.

Where'd you come across this? And what'd it run y'?

eBay actually! and it was less than $10 with shipping :)

I don't suppose there's another copy available on ebay?

I first saw this film when I ordered the DVD, and I loved it! I watched it several times afterwards, and I would like to again someday.

Any chance there'll be MP3 transfers of this LP? I love this special and its music.

Would love an MP3 transfer of these songs!

I second an audio transfer. I've been wanting to use those for a site called. Moises.ai to split them into instrumental and vocal tracks.