As I've mentioned in previous blogs, one of the regular features Ruth Plumly Thompson wrote during her tenure as editor of King Comics was a "Pet Post" column under the byline of "Arty," created from her two initials R and T.

The "Pet Post" from issue King Comics No. 45, January 1940, is of some special Oz interest. Thompson announces a contest for people to send in lists of "trademark" animals like Nipper, the dog from Victor phonographs, Borden's Elsie the Cow, etc. But Thompson goes on to discuss animals in film and makes her only references to Oz in all of King Comics:

I think the best performance turned in this fall by an animal actor was turned in by the small skye [sic] terrier who took the part of Toto in the Wizard of Oz film. He was so exactly like the dog in the story he might have jumped right out of Baum's book. No wonder Judy Garland wanted to keep him after the film was finished. But Toto is a graduate of a Hollywood school and highly valued by his owner. So he could not return to private life and is probably studying for his next part right now.

Of course we all know that Toto was actually played by a female cairn terrier named Terry. Her "next part" was an uncredited walk-on in George Cukor's The Women (1939). You can read Thompson's actual "Pet Post" below. 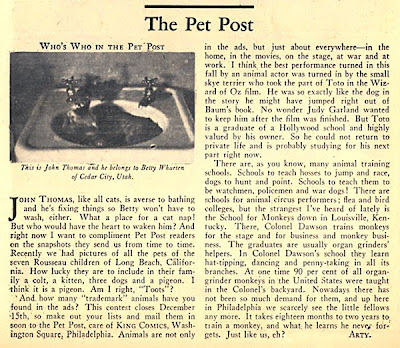