The View-Master of Oz 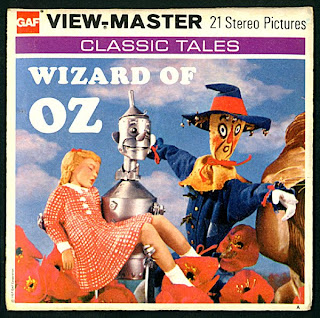 One of my favorite Ozzy things when I was a kid was my set of Wizard of Oz View-Master slides.

One especially cool thing about the set is that it is based on the book, not the MGM film. So seeing these 3-D photographs was almost like looking at the real Oz.

I recently loaded up my viewer, clicked my way through the story, and I was surprised to see how much the imagery from this set left such strong childhood memories. I loved seeing the "invisible" metal bar in the witch's castle. I loved seeing all of the Wizard's disguises in the background after he's revealed to be a humbug. I liked the photo of Dorothy and the Tin Woodman and Lion peeking through the curtains watching the Scarecrow get his brains.

This set was produced in 1957 by Sawyer View-Master, the year after The Wizard of Oz entered the public domain. I'm sure that is one reason View-Master took such pains to make sure it represented L. Frank Baum's book and not the MGM film. Indeed, the original Sawyer release of the reels was issued as The Wonderful Wizard of Oz. 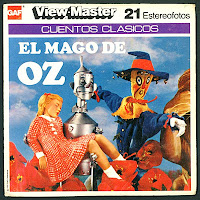 I never much liked the View-Master Dorothy - she seemed like the kind of girl I wouldn't much like. But I thought all of the other characters were very successful. Interestingly, the Glinda the Good looks almost exactly like John R. Neill's, from her pink gown to her cylindrical crown and snood!

There was one additional Ozzy View-Master set but I'm gonna save that for another blog! 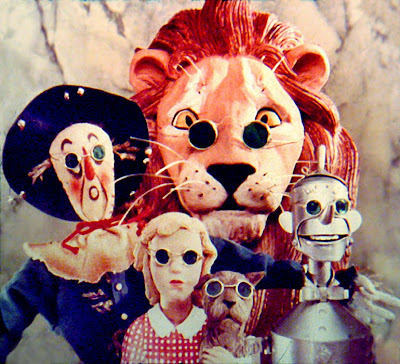 I just got this set on Ebay and agree with you on everything. I am a 53 year old artist and can appreciate the painstaking work that went into creating the figures and the sets. It is a lost art with computers these days, but this is a great look at past technology all wrapped around a wonderful book. Thanks for posting the article.