If I Only Had a Rattle

There are many foreign editions of the Oz books here in the Tiger Den. One of the great appeals in collecting these is that the foreign illustrators are usually not as hampered by their preconceptions from the MGM Wizard of Oz film or W. W. Denslow's original illustrations. 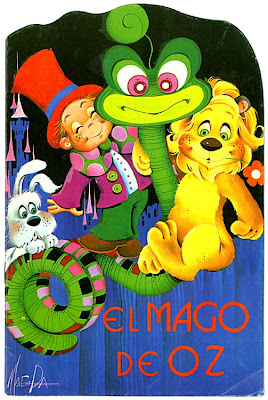 But occasionally a foreign edition will stop you dead in yuor tracks - such as this Spanish picture book edition. This eight-page picture book edition of El Mago de Oz was published in 1977 by Artes Graphicas Cobas, of Barcelona in Spain. No one is credited with the abridgment but the illustrations are by Magda.

We all know the story . . .  Little Maria and her dog get caught in a rainstorm and are blown to fairyland where Maria meets a Scarecrow that wants to be a real boy, a lion that wants courage, and a giant green rattle snake that needs a new rattle.

And there is everyone's favorite Oz character pictured on the cover! The giant green rattle snake that lost its rattle! 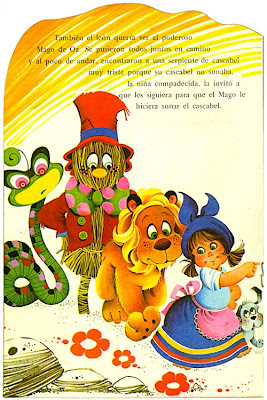 The boy in the red hat (pictured above) is the Scarecrow after the Wizard grants his wish to be a real boy.

At the end of the story little Maria wakes up from a nap after having played all day in the forest.

It was only a dream!

That has to be one of the more trippy revisionist Wizard of Oz stories i've ever heard of!