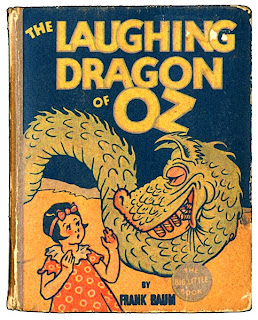 One of the Oz books I most desperately wanted when I was a teenager was The Laughing Dragon of Oz (1934) by Frank Baum. Those of you who know your Oz know that the author is actually L. Frank Baum's eldest son, Frank Joslyn Baum.

The book was published by Whitman as one of their Big Little Books and it caused all kinds of trouble. Frank J. had some notion that he wanted to continue the Oz books after his father's death. But his mother, Maud, had already signed a contract with the Oz book publisher, Reilly and Lee, to have Ruth Plumly Thompson continue the Oz series. It all got very messy. Because of the various rights and contracts, Reilly and Lee forced Maud to sue her eldest son for copyright violation. Laughing Dragon was never reprinted (and probably withdrawn from sale) and it is thus a fairly scarce book, as it is collected by both Oz folk and Big Little Book collectors. One could blog about the sordid legal issues for days - but I wanted to talk about two copies I have owned.

I finally got a copy when I was about nineteen. Longtime Oz collector and film maker Rob Roy MacVeigh was upgrading his copy and he sold me his old copy for $25. It was in good condition except for the teensy blemish that it had no cover! Rob made me a color xerox copy of the cover and I made a new cover for the book. It turned out quite well. A few years later I got a very nice copy of the book (with a cover!), but still had a strong sentimental attachment to my first one with my homemade cover.

In 1988 Eric Shanower and I were "engaged," but not yet cohabiting. Since Eric had no copy of Laughing Dragon at all I gave him the copy I'd made the cover for as a Christmas present. So it was out of MY collection but INTO my boyfriend's collection (so it's still in the family).

I doubted I'd ever be upgrading again as I get very attached to all my books and I had a really beautiful copy of Laughing Dragon. Then about five years ago an Oz friend steered me toward a copy I desperately wanted. But there was a catch - it involved my trading away my really nice one as part of the deal. And the copy I was trading for was not in as good a condition as mine. And it had been scribbled in! So why make the trade? Because of who had scribbled in it. 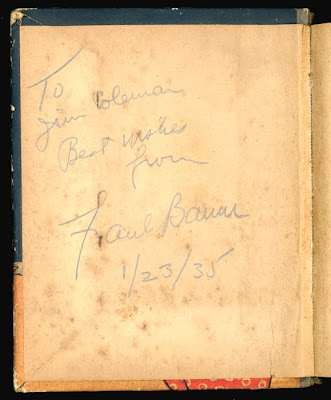 Oh my gosh... whoever made you do that trade must've been a serious jerk. Sheesh. I hope I never meet him; cuz if I do, I might say something really terrible to him!

Actually he's very nice, and was just being generous I think. I'll tell him to be wary of you though, just in case!

I was either given my copy of Laughing Dragon or charged 50c - I forget which. It's missing not only the cover but the first few pages - I forget how many.

Worth bringing back into print?

Still one of the few Oz books I don't have yet, Along with Lucky Bucky in Oz & Scalawagon's in Oz.
I occasionally I see it on Ebay and will pick it up at some point.

Is it a good Oz book? As I haven't seen any reviews on this one.

Alas, despite the title, the book isn't all that Ozzy - And Frank J. Wasn't much of a writer - at least of Oz books.

@Glenn: A reprint would certainly be worth doing. But the book is tied up in legal limbo thanks to both the lawsuit and the fact that it's still under copyright.

Yeah, I'd say an autographed Laughing Dragon is probably one of the rarest Oz books out there. How many can there be?

Thats a shame about the Ozzyness and the style, the collector in me will not allow to not buy a copy of the book at some point.

I have a multi-generation xerox copy of the manuscript, as well as a recent handmade edition (It is a good-looking thing, but with several quite insulting commentaries added within the text). Only a few pages were used in the Big/Little Book version, and it is considerably more Ozzy when complete. My problem with it, though, was the fact that it is basically LFB storylines with FJB names. EX: Jack Pumpkinhead has become a man made of oranges and our beloved Ozma is now Princess Cozytoes. I'd still buy an unabridged copy if it came out in a reasonably-priced edition, though. I consider it the most underappreciated Oz book to ever be written by a member of the Baum family.