Fanny Y. Cory and the Girl on a Tuffet 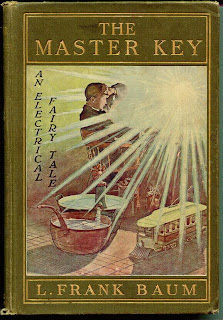 Illustrator and cartoonist Fanny Y. Cory illustrated two of L. Frank Baum's books: The Master Key (1901) and The Enchanted Island of Yew (1903). She had an extraordinarily long and varied career.

She was born on October 17, 1877 and died on July 28, 1972. She illustrated many books and was a pioneering woman cartoonist - her two major comic strips being Sonny Sayings and Little Miss Muffet.

The Little Miss Muffet strip was begun in 1935 and ran until at least 1940. Some on-line sources say the strip continued on until 1956 but I have see no strips that late. 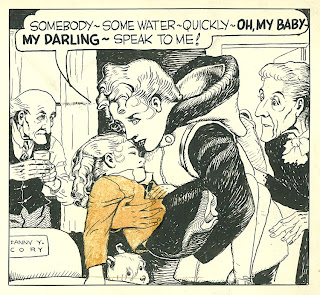 The strip was syndicated by King Features and was almost assuredly meant to emulate Harold Gray's Little Orphan Annie. The yellow tone in parts of the strip is rubber cement reside which originally held on the Zipatone which has long since fallen off.

I especially like the maid in this strip - she's always reminded me of Margaret Hamilton. We'll see some more Cory in the coming months - but that's it for today!