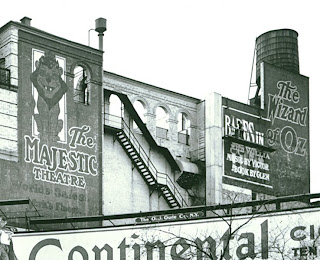 In addition to Oz collecting I have a strong interest in  early musical theatre - both Ozzy and otherwise. A particular favorite is Victor Herbert's Babes in Toyland (1903).

Many things in Babes parallel Wizard: elements of the plot, the comic animals, opening the show with a pantomime and a storm. Babes was also produced by Fred Hamlin and Julian Mitchell who had produced Wizard. And Bessie Wynn, who played Sir Dashemoff Daily in The Wizard of Oz, went on to play TomTom the Piper's Son in Babes in Toyland where she introduced the still-remembered song "Toyland."


I have a lot of Babes material; but my pride and joy is an original 1903 poster from the show that I got off eBay about ten years ago. It had some problems: a few rips and tears, scotch tape, staining. But Broadway lithographs over 100 years old are pretty rare in any condition! The image on the poster represents the "Birth of a Butterfly," an especially beautiful moment in the show.
A couple years ago I finally splurged and had it professionally restored. The restorer liked my poster so much he made a great little video about the project. I thought you might like to see it.
Posted by David Maxine at 8:00 AM

Wow what a stunning restoration!

That poster is beautiful! Don't think I'm lame, but what do you think of the 1934 Babes In Toyland film with Stan Laurel & Oliver Hardy? I love it.

The Laurel and Hardy film version is one of Eric's and my favorites!

A lovely job - I actually ran across this video a while back, but had no idea it was your poster!

It's a small world after all!