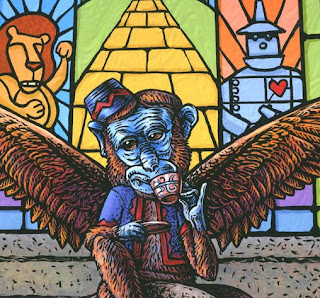 Another Ozzy discovery at Comic Con this year was a  very cool Winged Monkey print by Chet Phillips, called "The Refined Henchman."

The archivally produced (and signed) print shows a Winged Monkey sipping tea with an Ozzy stained glass window behind him (a detail from the image is shown at right). The entire image can be seen and a print ordered at this link.

Chet Phillips's illustration website focuses largely on his book The Society of Sinister Simians, which, in Phillips own words, "explores the mysterious world of an evil collection of vicious and power hungry primates that held sway over the land centuries ago. Thanks to the efforts of the ill-fated Sourcrust archeological dig of 1887, details of this foul organization have finally come to light. In this book you will learn of The Society's immortal leader, his powerful and brutal cadre of ministers and advisors as well as a variety of assassins, spies, soldiers and frightful supernatural figures." 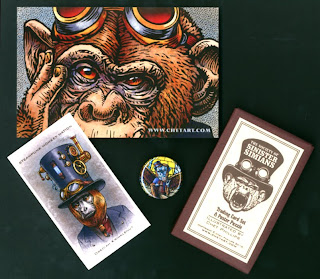 So check out the "Refined Henchman," Phillips's neat book, and a lot of other cool steam-punky monkey stuff.