Continuing with the reports on my adventures at Comic Con, I hadn't looked to fill any holes in my Ruth Plumly Thompson King Comics collection for several years. But the various Thompson posts in this blog got me a little revved up - so on Wednesday "Preview Night" of Comic Con, things seemed a little slow and I headed off to browse a bit. 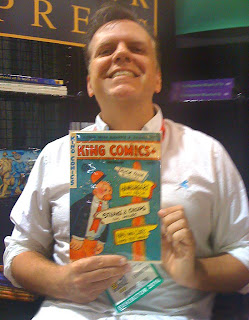 In half an hour I was back to our booth with a new treasure! King Comics No. 80  from December 1942. This issue contains Thompson's letter to the readers in which she, as Jo King, and the other characters from the comic strips tidy up the castle and do "War Work" This issue was published almost a year into World War II. There is also a full page "Pet Post," and finally a double-page short story, illustrated in color, called "The Adventures of the Fuzzywells."

This late into RPT's King Comics career, she was not always writing a story for each issue, so this is a nice little find. The "Fuzzywells" had first appeared in her children's page for the Philadelphia Public Ledger.

So that was the fun for Wednesday night of Comic Con. Now I just need a few minutes to sit down and read the story! 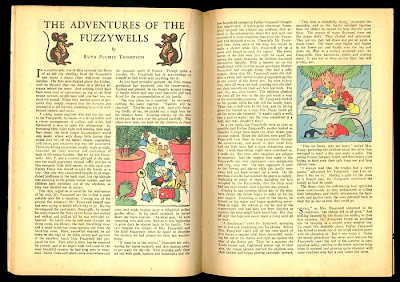