Don't BLOG a Book by its Cover

Last week I had to purchase a lot of fourteen old books on eBay to get ONE that I wanted. The lot was poorly presented - just titles and a quick, dark photo of all the spines. But it listed a book I wanted. I bid. And I won.

They just arrived. And after pulling out the book I'd been bidding on, I took a few minutes to see what other stuff was in the box. It was pretty much a lot of old crap: forgotten novels, cheap reprints of old poems, a few religious tracts. Eric was sitting beside me as I showed him the box of mediocre loot and he said, "Any of those have Denslow cover designs?" 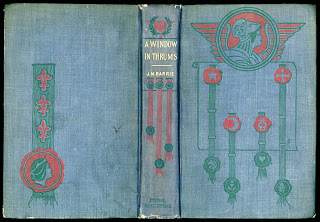 I said I doubted it, that the only one with a halfway decent cover was a budget reprint of J. M. Barrie's novel A Window in Thrums. I pulled the book from the foot-high stack to show Eric and I said something like, "Well I'll be hornswoggled! It IS a Denslow cover!"

From what I can tell in the W. W. Denslow bibliography, this is a "stock" cover design that Denslow did for the publisher Donohue, Henneberry & Co. in 1899. It has been reported on several different books, including George Elliot's Adam Bede and Victor Hugo's Hans of Iceland. I have not actually seen any of these others so can't tell if the colors or imagery might have been different.

As you can see, Denslow provided a handsome but generic cover design. The main motif seems to be an assortment of wax seals and it's printed in jade green and dark red. Denslow's seahorse monogram appears in the lower right corner of the scroll on the front cover.

Hooray for accidental acquisitions!
Posted by David Maxine at 12:43 PM

@Freddy - Actually I meant I had said "horn-swoggled".

I have slightly altered the sentence to make the words more explicitly mine ;) In reality, this is just cute blog-speak. But Lands o' Goshen, Freddy!I'd never say horn-swoggled either, by crackey!

What a fun cover - and more elaborate than some of his more specific efforts!

I was sort of hoping you had one of those others. I'm curious to see if they altered the colors or if it is in fact the same "stock" design reported earlier.

Oh, it's not my turf - I'm always curious to see more! I've never seen this one, so I can't answer the question about color. It's interesting that the title is only on the spine - but it makes sense if it was used for several different titles. Still, you'd think they might have printed some sort of generic type into the central box on the cover...

But what was the book you were bidding for?

@Glenn No blog post on that - it wasn't an Oz related book :)

Nice snag, David! Hans of Iceland is identical... Except that the cover is green, instead of blue. May I have a higher resolution scan of yours to add to the presentation that Cindy and I are putting together for Winkies next year?

@Bill - Thanks for the info on HANS OF ICELAND. Of course you can have a scan ;)