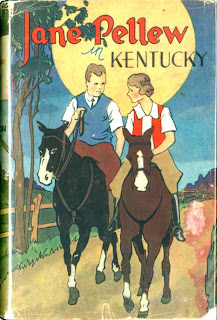 Occasionally my Ozzier friends and I play a little game called Oz Connection. It's kind of a three-way combination of Ozian lore, Trivial Pursuit, and a pop-Culture quiz all rolled into a game approximating the party game called "Six Degrees of Kevin Bacon." It's an amusing thing to do while driving to an Oz Con. It goes something like this:

One person says, "E. B. White," and then another player must try and link E. B. White to Oz as closely and quickly as possible. While there are probably MANY different routes, the first to pop into my head was: E. B White wrote Charlotte's Web. In the 1973 film version, the voice of the Goose was contributed by Agnes Moorehead; and she played Mombi in the Shirley Temple television production of The Land of Oz.

Anyway, I thought I'd try a little Oz Connection contest here on the blog. Up above, you have no doubt noticed the book cover for Jane Pellew in Kentucky. In the blog's "comments" tell me the Oz Connection. I'll post MY connection string in a day or two.


Possible Spoiler Alert!
In future Oz Connection posts (assuming I try this again) I should probably hold all comments for 24 hours so that as readers post responses they don't spoil the fun for others. So please add YOUR comments before looking at everyone else's comments. And just because someone has proposed a connection string doesn't mean there aren't other or better strings to be found.
Posted by David Maxine at 1:04 PM

This Campfire Girls book was published by Reilly & Lee, the same company that published the Oz series.

Also... "Templeton the rat" in the film version of Charlotte's Web was voiced by Paul Lynde, who also performed as (Jack) Pumpkinhead in Journey Back to Oz. What a web of connections!

I'll point out that Agnes Moorehead was the voice of the Goose in the first film version of Charlotte's Web, the 1970s Hanna-Barbera version. I'll also point out that Moorehead also did voices for the 1933-34 Wizard of Oz radio show.

And as for Jane Pellew in Kentucky, that book was published by Reilly and Lee in 1936. Reilly and Lee were also, of course, the publishers of the Oz books.

There's a similar thing I did while browsing Wikipedia. Take a random page and use the linked words to get to "The Wonderful Wizard of Oz."

Again, sorry I started publishing comments before everyone had a chance to play with no "clues" from other player's comments.

However, no one yet has taken this "Oz Connection" as far (or as specifically) as one can take it.

So the title is "Jane Pellew in Kentucky"...
Emma Speed Sampson wrote "The Comings of Cousin Ann". It's set in Kentucky...and she was allowed to write under Baum's pseudonym of Edith Van Dyne.

I don't know if this adds anything, but the book was written by Margaret Love Sanderson who wrote several books for Reilly & Britton - some Camp Fire Girls stories as well as the Captain Becky series, and possibly others. Camp Fire Girls at Pine Tree Camp from 1914 was illustrated by Pauline Batchelder who illustrated The Daring Twins by L Frank Baum.