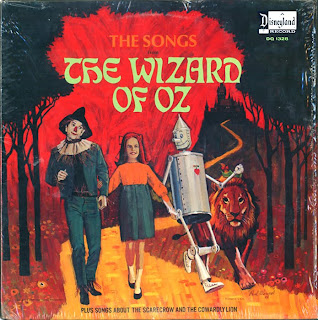 After writing a few days ago about how I was first introduced to Baum's Oz, I got to thinking about my earliest Oz memories, and that made me think of this record.

I probably saw the MGM Wizard of Oz film for the first time when I was four or five years old. I watched it on a small black-and-white television my parents kept in the kitchen. After I'd seen the movie this couple times, but before I'd discovered the Oz books, I can remember sitting on the floor of my bedroom staring at this record jacket and playing the record on my small phonograph. My Dad was a Hi-Fi nut and so of course I had my own phonograph from before I can remember.

This album is rather odd and it confused me greatly for a year or so. But I loved the cover art. I could look at it for hours - and did! The confusing part to my five year old self was separating the conflicting imagery on the album cover from my memories of the film. On the one hand the Scarecrow looks quite a bit like Ray Bolger; yet the Cowardly lion seems to be a real Lion. I knew the characters were portrayed by actors - my Mom had explained all that - and I'd heard all about Bert Lahr and Judy Garland. But how, I wondered, did Jack Haley get his legs inside those super narrow tin legs in the costume on the record album? And why does Dorothy look sorta ... well ... different? She reminded me of Kathy Garver on Family Affair but with a That Girl! flip hairstyle.

But the songs on the album were really confusing!  Side A features Disney Studio singers performing four songs from the MGM film - plus a song called "Happy Glow" subtitled The Scarecrow Song. Having only seen the movie two times at this point (and each viewing a year apart) my six-year-old imagination plugged this oddball song into my memories of the film. Side B of the album was even weirder. It featured songs from something called The Cowardly Lion of Oz. I paid little attention to this and think on the whole I didn't like the B side much. But I remember when I next saw the movie,  the year after I got the album, that I was really surprised when Margaret Hamilton didn't sing "Just Call Smarmy." In the year of playing the record to pieces, my imagination had smooshed this song into my memories of the film.

This Disneyland LP was originally released in 1969. That year The Wizard of Oz aired on March 9th. I suspect that I got the record shortly after seeing the movie on TV. I have one other major Oz memory from 1969. I was lying in bed and supposed to be asleep. I could hear my Mom and Dad in the kitchen watching the news on the little black-and-white TV that I'd watched The Wizard of Oz on a few months before. My Mom heard me stirring and she came in to check on me; she was obviously kind of upset. She said, "Honey, Judy Garland died tonight."

I don't think I knew exactly what it meant. But I remember asking her if we could still watch The Wizard of Oz on TV. I worried that if Judy Garland was dead, somehow the movie might cease to exist, too. Or perhaps I thought of it as something that was enacted live each year.

Mom assured me that we could still watch the movie. And of course we did. Who's to think one could get nostalgic for watching The Wizard of Oz on a ten inch black-and-white television with commercial interruptions.
Posted by David Maxine at 7:00 AM

I've read that Disney bought the rights to the Oz books, but had trouble figuring out what to do with them. I've read of Oz characters showing up in a Disney TV special in the 1950s, and of another Disney Oz album featuring Ray Bolger as the Scarecrow. Maybe the record you had as a child contained some songs from some unfinished Oz projects people at the Disney studio had been working on.

Your guess is correct. But i chose not to go into detail about what those odd songs actually were. I was saving it for a future blog.

Some of the songs were indeed written for Disney's RAINBOW ROAD TO OZ TV special and unfinished film. Most of the songs on Side B of the record I blogged about were from a Disney Storybook LP called THE COWARDLY LION OF OZ which has nothing in common with Ruth Plumly Thompson's book of the same name.

All this just seemed like too much info to cram into one blog post. But I will address it in the coming weeks.

Would you recommend "The Songs from the Wizard of Oz" for someone who bought all the story albums?

@Jared - not sure what to say about that - there isn't really any new material on the SONGS album. If you have the Disney WIZARD, SCARECROW, and COWARDLY LION LPs you have all the material (except for the spiffy cover!)