Last week we looked at Reilly & Lee's 1920 promotional Oz map. Since I am trying to tackle the various Oz maps in chronological order, we've come to a very unusual map - perhaps not even a map at all in the big scheme of things. Yet it offers some points of interest - and it's very beautiful, too.


This is the board game for Parker Brothers' 1921 Wonderful Game of Oz. At first I didn't think I'd have much to say about this map, but there are a few things to point out. Most obviously this map presents Oz as a squarish country - much like the 1909 Fairylogue map - but I am fairly certain that Oz has gone square simply to accommodate the traditional shape of this sort of game-board. The shapes of the countries are clearly based on the shapes from the 1914 Oz maps (note the phallic pan handle of the Gillikin Country).

But there is a huge adjustment to this map that I'd not really considered before. The Munchkin and Winkie countries have been flipped to reflect traditional east/west positions. Both the 1914 map and the 1920 map show the Munchkins on the left (though of course those two maps disagree about where east is located on the compass). The game designer clearly knew that the Munchkins should be in the east as Baum always stated, and the designer made it so. Perhaps a brave choice, since it flew in the face of the 1920 map issued by the Oz book publisher only the previous year.

The map is also the first to show locations from almost all of Baum's Oz books. The only book not represented on the map is Glinda of Oz - there are no Skeezers or Flatheads, even though there is plenty of room for them. This makes me question when the game was being designed. Perhaps the project was begun before the publication of Glinda in the fall of 1920? I don't really know how long games were in the publication pipeline back then. Of course the Skeezers were on the 1914 map - one of the locations Baum had added to the map that he had not yet written about. So this is in fact an omission. So whether the game designer had never seen a copy of Glinda or the game was designed before Glinda's publication, we will likely never know.

Several of the locales on the map are of interest because they show us things seldom pictured in the actual Oz books - such as this full color view of the Tin Woodman's all-tin castle. This is an adaptation of Neill's drawing of the castle from The Road to Oz (1909), but I think it's neat to see it in color


Below is a rare view of Professor Woggle-Bug's Royal Athletic College. Note the imposing statue of the esteemed insect on the point of the roof! And I love the giant mortar-board on the large dome, too.


The game-board also offered the best view we ever had of Glinda's Castle until Eric Shanower's Blue Witch of Oz.


There are many neat spots to explore on this game-board map. It shows so much care and love for the Oz books that I find it impossible that the designer was not a HUGE Oz fan. I wish we knew who he or she was. Another interesting point is that this map unifies the Oz series. It features the locales from The Wizard of Oz which my readers know was published by a different publisher than the rest of the Oz books. Note the Denslow-like Hammerhead to the left of Glinda's castle.

Here's one more curious spot. On the edge of the lake there is an imposing pink structure not referenced in the Oz books. I wonder what it was supposed to be? The pointy end of the lake and the anthropomorphized big tower almost look like a face and word-balloon. 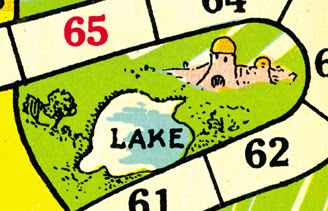 That's about it for this week's map blog. But if you find this game-board intriguing and would like a chance to play The Wonderful Game of Oz, why not join us at the 2012 Winkie Convention, July 27-29 in Pacific Grove, California? Because we have a gigantic version of the game set up for your playing pleasure! 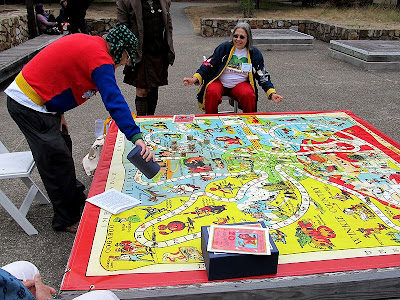 You can read all about our giant version of the game at the Winkie Convention on this previous blog post. It's a lot of fun! OK, that's it for this week. Next week we'll be looking at the 1927 Coloring Contest map.

The first thing that caught my attention on the map was the combination of Denslow and Neil art types ... these days that probably would never have gotten done without an army of lawyers.

I love the board because of all the characters. Sure, it might not be the greatest in fairyland cartography, but it makes Oz look right: full of all these wonderful colorful characters.

@Mark - I don't think I've ever heard how the rights were acquired for this game - whether Parker Brothers went thru Maud Baum, Frank J. Baum, or Reilly & Lee. Since BAum and Denslow shared copyright on WIZARD I suspect that the Baum family could have given permission to use Denslow imagery - while Reilly & Lee could not.

Hmmm .. That might be a good idea for Winkies this year! And not too difficult as I've already done lots of clean up on the image (getting rid of the center seam and cleaning up lots of printing glitches)since I needed to make sure it look good when it was eight feet wide :)

Three minutes more thought and I think it's even a plan!

The Wizard seems to be a bit of a hybrid between the Denslow and Neill versions.

One character who is notably missing is the Nome King (Roquat/Ruggedo). His (ex) Kingdom is not on the map of course, but that didn't stop the artist from putting Rinkitink and Bilbil on it.

And while Baum put the name "Skeezers" on the 1914 map, he didn't specify anything else about it. It seems obvious that this game was designed before GLINDA was published (or at least before the artist had a chance to read the book).

Maybe that last building is Ozma's lake house. The lake itself is kind of interesting because it really doesn't play a part in any of Baum's books, aside from a brief mention in Lost Princess. Neill uses and names it in Lucky Bucky, but that doesn't tell us what Baum was thinking when he came up with it. There is, of course, the Oz story fragment about the lake involving Gipper-Gupper-Gopp and Ahd, but whether this was actually written by Baum remains a mystery.

I haven't played the game itself, but I've read the rules, and those WIZARD dice sound complicated. Did revivals of the game use those dice, or just normal ones?

Actually, as of the end of Magic (and before the end of Kabumpo), Ruggedo SHOULD be living in Oz.

Since the whole game is in public domain, it wouldn't be that much of a stretch to reproduce the whole thing.

According to Bill Campbell (on his Oz Enthusiast blog): "I coaxed a few friends into trying the game, and have to admit it's not one of the more exciting board games I've ever played!"

@Nathan - You are correct about Ruggedo and it seems too bad he's not on the map.

The Winkie Newsletter will contain a call for people to write some alternate rules for playing the game that might make it harder and more fun. After the newsletter appears I'll run a blog about it.

And of course there have been later Oz board games, most of which have used a Yellow Brick Road player path and which may be more or less map-like.

Here are some of the morre mappish ones: