Most of you know that in addition to writing this blog I am also the Programming Director for the Winkie Convention, which will be holding it's 48th annual celebration of the Baum and Oz books this July (click here for details).

I am delighted to announce that the family of Oz illustrator John R. Neill has donated an original drawing to the Winkie Con. This drawing will be auctioned off as a fundraiser for the Winkie Program Fund on Saturday evening July 28, 2012.

This wonderful and important piece of artwork was one of the last Oz drawings John R.Neill ever did. It is the best of the cover roughs for Neill's final Oz book The Runaway in Oz and also includes multiple character sketches and illustration ideas on both sides of the same sheet. Neill died in 1943 before completing the illustrations, and the book remained unpublished until 1995 when Eric Shanower picked up the baton - revising the manuscript and preparing his own new illustrations.These wonderful sketches are John R. Neill's vision for his final Oz book. So let's take a look at Neill's drawing.


The piece we are offering is drawn in pencil on both sides of a sheet of paper measuring 10 - 1/2" x 7 - 7/8". This side of the paper features the most detailed of Neill's cover studies for the book, showing placements for the cover lettering, indications of color: note the word "blue" at the top of the image and Neill's scribble indicating "orange" for the title lettering. Neill has indicated the position of the "credits" by drawing simple boxes at the bottom of the image - though Neill has scribbled in "L. Frank Baum" at the lower right corner. The right-hand side of the image shows Scraps and the spoolicle in another position, as well as what's likely Neill's only portrayal of his character Captain Battery-Bat. The woman drawn on the bottom edge may be Fanny the Weather Witch, although it's hard to tell since her description in Neill's original draft is vague - maybe it's the Queen of the Conse-quinces.


The back of the sheet of paper is jam-packed with other sketches! The left-side shows multiple facial expressions for the Friendly Cloud. You can see the Patchwork Girl and her spoolicle (very tiny) sitting on top of the uppermost cloud. The right side shows several more views of Scraps and the spoolicle - the central one is especially interesting as it shows Neill experimenting with how he would get multiple characters onto the contraption. Popla the Power Plant is holding on at back and a character who's possibly Fanny the Weather Witch is leading the parade. Scraps has her legs extended over the handlebars. At the bottom of the page are two more small sketches. I'm unsure who the character at the left is - maybe the Twinkler. The boy on the bottom right is almost certainly Alexample.

You have no doubt noticed the mathematical figuring. Neill did this a lot on his sketches. Not quite sure what he was doing, but many of Neill's sketches and the backs of his illustration boards have mathematical doodling all over them.


As I said, this is the most detailed of Neill's several cover roughs for the book, and it was this image that Eric Shanower used as inspiration for the 1995 publication of the book. 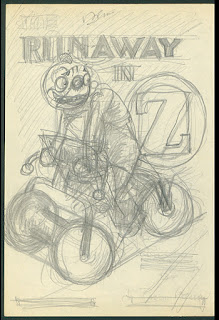 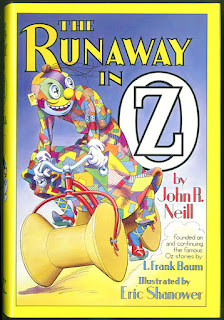 Below is another example of how Shanower incorporated Neill's roughs into the final book.
You can see what a truly fine and interesting piece of Oz history this is. While lots of John R. Neill artwork survives, his Oz work is still quite rare. And these preparatory studies are rarer still and perhaps most fascianting of all, as they let us into Neill's mind to see his design process. This really is a marvelous piece featuring one of Baum's most beloved characters, the Patchwork Girl. 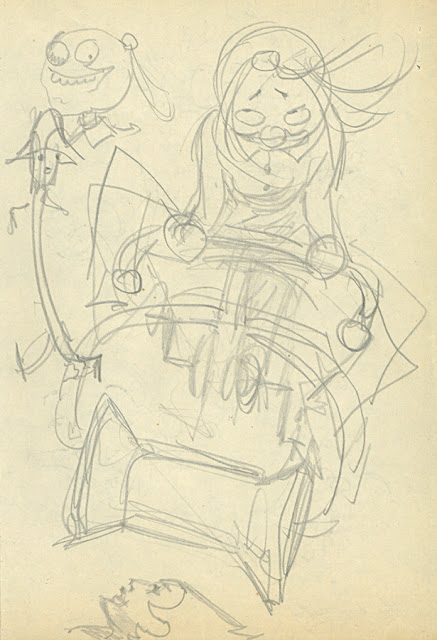 Please note, too, that the proceeds from the sale of this drawing will go to benefit the Winkie Convention Programming Fund. The drawing was donated as a memorial to their mother by the children of Joan Neill Farnsworth, the youngest of John R. Neill's three daughters, who passed away early last year.

For information on attending this year's Winkie Con click here for more details and links to download the info pack and registration forms.  I hope you'll join us!
Posted by David Maxine at 2:44 PM

Something I've never been sure of--did Neill pass away unexpectedly?

Wow. Quite a treasure. I hope it falls into the hands of a careful & loving curator.

@Scott - If I recall correctly, Neill's health was very poor the last year of his life but the death was rather unexpected. I think it was a heart attack.