A few days ago a friend called to ask if I wanted some Oz books he'd found at a local book sale. He said there were fourteen of them so I assumed it was a set of Baum titles. He didn't tell me the titles but he said they were older editions probably all from the 1940s. I asked how much they were and was told five bucks for the lot. I said, "Sure!"

My friend called back a bit later and said he'd been misinformed - that the books were $5 each. But if I was gonna take all fourteen I could have them for $50. I said, "Sure," again. This is what I got. 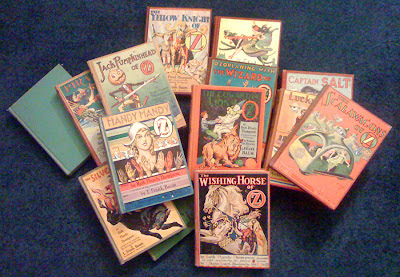 Needless to say I am quite pleased. All but one (a 1950s edition of  Wonder City) are indeed from the 1940s; most have gift inscriptions from 1944 to 1946. They are all in quite nice condition and nearly all have their pictorial endpapers. There are three first editions: Captain Salt, Scalawagons, and Lucky Bucky as well as a 1944 first printing of the Evelyn Copelman edition of Wizard from 1944.

I'm quite excited for my little treasure trove - but I am beginning to think the value in Oz books is starting to come crashing down. I am seeing so many now. In the 70s, 80s, and 90s, Oz books were hard to find. One seldom walked into an old bookstore and saw a row of old Oz titles. Now I see a few at least  in most every old bookstore I go into. And it's not just in San Diego. When Eric and I were driving across the country this past Christmas I saw quite a few Oz books along the way in Antique Malls and bookstores. The internet and eBay are overflowing with bargains! Multiple copies of Thompson first editions in dust jacket for under $300 - half the price such books would have been five years ago. All I can assume is that supply has caught up with demand and the Ozzy market is saturated.

Clearly very fine first editions, signed books, and the like hold a certain value - but from the prices I'm seeing online and in bookstores I doubt I could sell books I bought in the late 1970s for what I paid for them back then. There is a very decent first edition of Hidden Valley of Oz on eBay right now going for under $18 and no one is even bidding. There is another lovely (and overpriced) first edition in dust jacket going for almost $500, too. No one is bidding on that one either.

So while I'm really pleased with my little trove I do wonder what's happening to Oz and book collecting. Never has it been so easy and so affordable to build a decent collection. Sadly so few people seem to have an interest in doing so. That said, it's nice to have friends who will call when they find Ozzy treasure!
Posted by David Maxine at 2:49 AM

Email ThisBlogThis!Share to TwitterShare to FacebookShare to Pinterest
Labels: Bibliography

I can only assume the poor economy has required prices for old books to go down or else they won't sell. Possibly book dealers would rather sell books at a loss than not sell them at all.

Perhaps the explanation lies in demographics. People who grew up in the 1930s and 1940s (the last period that Reilly & Lee regularly added to the series) are now in retirement and downsizing their houses.

Last time I visited eBay I was amazed to see a not-first edition of Hungry Tiger for which the seller was asking something just under a thousand dollars - the description even said some of the illustrations had been carefully and skillfully crayoned in (as though that were a plus!), the only color in the book, it seems. The price was buy-it-now, not auction ... I suppose that was just some wacky outlier? Almost as freaky as getting firsts for $5, maybe.

Exactly - The market is just very whacked at the moment. Last year someone on eBay was trying to sell a paint-by-numbers Oz painting fro ma kit as an original OZ painting for - I think - $20,000.

Oz books did seem hard to find at one time. Now, with the internet, the market is saturated. Add that to the fact that Oz books were never really "rare" to begin with (sorry if I'm stepping on an eBayer's ID), and the demographics are against Oz book collecting. I remember Fred Meyer writing (in the early 70's) that collectors of Oz were driven by nostalgia. Nowadays, nostalgia means finding a Gameboy or Atari console on eBay.

I used to peruse eBay almost every day. Now I might check it out a couple of times a month. I figure if I miss something an identical or better title will turn up eventually. With so many titles available, the collecting sense of urgency doesn't seem to be there anymore.

@Scott - Sadly, I think most of what you say is right on target. However, there was an exception to Fred's notions. Oz was also attracting passionate new followers back in the 70s and 80s. It wasn't "nostalgia" that brought the likes of me, Paul Bienvenue, John Bell, Eric Gjovaag, Judy Bieber, Eric Shanower, and many others into collecting and into the Oz club.

I'm willing to accept that we were a teensy proportion of the populace - I just don't get why the splinter of passion in Oz, Baum, and books has dwindled to near sub-atomic proportions.

You can expect a full-blog on this subject - I've been pondering it for a long while now.

To be fair, this phenomenon isn't only related to Oz. The widespread availability of items on the internet has affected prices for all collectibles and antiques. Like you said, it's never been so easy and so affordable to build a decent collection. That's not a bad thing. And if you check the completed listings, the more uncommon items (and white editions for some reason!) are finding buyers. It may just be that 15-20 editions of Kabumpo aren't going to sell all at the same time.

It is strange, but at the same time almost exciting for me if it means one day I may be able to own these books.
But I can see what you mean.
I just wonder if our society is losing interest in old books.
Maybe what we need is another Oz revival to renew interest and raise prices.
If they featured Oz books on some of those pawn shows it might help as well.