Last week we explored the Lost Princess of Oz map of 1916 and that brings us to the trouble-maker! This is, of course, the 1920 map printed by the publisher Reilly & Lee and given away with Oz books for the next year or so.


With one huge exception this is the map printed in Tik-Tok of Oz in 1914 - the exception of course is the "correction" of the compass directions to match our "real-world" compass with east on the right and west on the left. On the last three maps we've discussed (all designed by L. Frank Baum) east and west were flipped - the eastern Munchkins on the left hand side of the map and the western Winkies on the right.

I very strongly believe that Baum liked the wonky directions (no idea why!). He created three maps with this "mistake" and had multiple opportunities to correct them, had he wanted to. Oz retained its Baumian directional compass until Baum died in 1919, and then suddenly ZAP! the publisher pulled a switcheroo and reprinted the map as a give-away and they flipped the compass back to normal and the trouble began!

The trouble being that in 1920 Reilly & Lee hired Ruth Plumly Thompson to continue writing the Oz books and they sent her copies of this map. She then proceeded to describe a Land of Oz with the Munchkins in the west and the Winkies in the east!  I certainly don't blame her - the publisher had just hired her to write new Oz books and sent her the "official" map of Oz. A map that sadly no longer reflected Baum's view of his fairyland - so half the Oz series would come to say the Munchkins are in the east and half the series would say the Munchkins were in the west. Not much else to say. This map has caused people to blame Thompson for not paying enough attention to Baum and confused a whole generation of new Oz fans.

The map itself is very well printed on a nice coated paper. There must have been many copies printed and distributed as this map is not particularly rare. Indeed, it is the most common of all the Oz maps printed by Reilly & Lee! The black and white coloring-contest map seldom turns up, nor does the undersized Who's Who in Oz postcard map, and the 1968 Poster maps are rarer still.

One reason so many of these 1920 maps may survive is that, when folded, they fit perfectly inside an Oz book so children could keep them handy. The back of the map is said to show the Oz flag.


I agree it looks like a flag design, but I've never seen any Reilly & Lee publicity stating that it's the Oz flag. I wonder if there was any? I also wonder why the publisher didn't just print the map of surrounding countries on the back.

Reilly & Lee introduced one other mistake into this 1920 Oz map - they are using the same plates they used to print it in the 1914 copies of Tik-Tok of Oz. While they went to the trouble to "correct" the compass they did not get rid of the extra 3/8" space at the middle fold of the map. This space was added in 1914 to accommodate the crease at the hinge of the book. Look up at the top image of the map: The Gillikin mountains and lettering are separated by a blank area. There is a similar gap in the forest of the fighting trees in the Quadling Country. And the Emerald City appears as a widened horizontal jewel, not the circular emerald it should be. Here's how the map should appear without the extra 3/8" stretch: 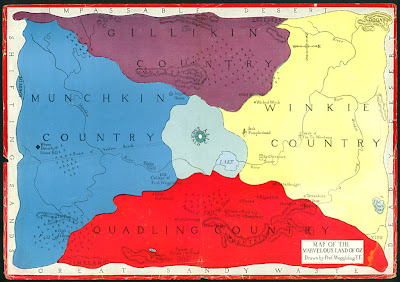 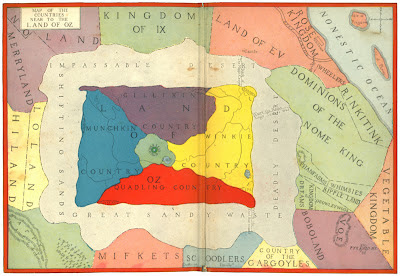 Notice how much wider the Winkie Country seems. Because of this added 3/8" the Emerald City is not even in the center of Oz anymore and here the city appears round like it should. These 1914 maps only show Oz correctly when they are viewed as endpapers and have that 3/8" space absorbed into the crease at the hinge. This was a really nice touch and showed a great deal of care and foresight in the design of the 1914 maps. Few people would have taken the trouble to adjust the images of two different maps so that they would each appear correctly when glued into the book.

That's about it for this week. I will add one bonus tale though. This copy of the 1920 map was one of the very first "antiquarian" Oz things I ever bought. I had just joined the Oz Club and the first person I contacted via the old Oz Trading Post was James E. Haff, who had offered a good sales list. I bought two things: the 1954 "Popular Edition" of Magical Mimics and this map. I had two months worth of allowance on hand - I was fourteen. So except for my childhood "white editions" this map is the Oz item I've had the longest.

See you next week for the 1921 Parker Brothers gameboard map.
(Click here for the next Oz Map blog post.)
Posted by David Maxine at 2:00 PM

Your Blogs on the Map/s of Oz really make me get out the selected Oz books and see them again!

Even if Thompson was consulting the 1920 map, when she began writing her books the Munchkins were still east and Winkies west (I just checked the online versions of ROYAL BOOK and KABUMPO and the Book of Common Focus discussion on COWARDLY LION and GRAMPA). It would seem that GRAMPA IN OZ (1924) was the earliest occurance of the mix-up.

I remembered that RPT was a bit inconsistent in her directions but failed to verify what she did in those first two book. I should have.

Still I can't help but assume the map is to blame for her reversing the directions when she did do so. Consistency and careful research were not her strong points.

You are of course correct -- we know Thompson consulted the Reilly & Lee maps -- the Autumn 1970 and Spring 1982 BUGLEs have three different ones annotated by her. If the BUGLE editor permits, will these maps be featured in this series? Will you also be able to cover the fan drawn maps from the Spring 1963 BUGLE?

Also in your mention of Reilly & Lee promotional maps, you missed this color 1932 one (at http://www.georgeglazer.com/archives/maps/archive-pictorial/ozmap.html) which I hope you get to cover as well.

I hope to include all those maps if possible.

I will certainly be discussing the 1932 map but I didn't list it as I've never considered it as a Reilly & Lee map - I have been assuming it was prepared by the comics syndicate. Was it distributed by Reilly & Lee?

You are probably right -- I was just going by the Reilly & Lee copyright notice on the 1932 map. I suppose that there were advertisements for the map in papers carrying the comic strip. It certainly is more attractive than the ones Reilly & Lee produced.

That's the map I most want to own a copy of, too! If anyone wants to send me one ...

I've been rereading the Oz books over the last few months and just finished COWARDLY LION. It looks like Thompson may have switched the Munchkin and Winkie countries in mid-book! The book takes place mainly in the Munchkin country. In Chapter 9 (p. 119 of the Reilly and Lee edition), it is clearly stated that the Winkie country is in the West. Yet in Chapter 17 (pp 225-226), when the characters are atop Stone Mountain, which seems to be in the Munchkin Country, the glow of the Emerald City is stated to be visible to the East, implying that the Munchkin Country is now in the West. Of course it could be a typo, but that may have been where the switch occurred.

Regarding Oz flag: "This flag was divided into four quarters, one being colored sky-blue, another pink, a third lavender and a fourth white. In the center was a large emerald-green star, and all over the four quarters were sewn spangles that glittered beautifully in the sunshine. The colors represented the four countries of Oz, and the green star the Emerald City." From Dorothy and the Wizard in Oz