The most obvious and important detail on this map is that Baum has filled in the the countries beyond the desert with the geography from most of his non-Oz fairy tales: The Life and Adventures of Santa Claus, Dot and Tot of Merryland, Queen Zixi of Ix, and John Dough and the Cherub. Baum had first shown us that these places were in the same universe in The Road to Oz - but now we have geographical evidence of their proximity

It's interesting that Baum did not work Mo into the map, although he'd already introduced Mo into the Oz books with the Wise Donkey in The Patchwork Girl of Oz the previous year. And of course Trot, Cap'n Bill, and Button-Bright visit Mo before they travel to Oz in The Scarecrow of Oz the year following this map.

As in the 1914 Map of the Land of Oz Baum has added a couple locales that readers were not yet familiar with, such as Rinkitink, Boboland, and the Island of Pingaree. I wonder whether Baum added them to this map because he had hopes of one day publishing the 1905 manuscript King Rinkitink or if he already knew he would turn that manuscript into Rinkitink in Oz in 1916.

There are a few oddities and mistakes on this map. Hiland and Loland should be an island as it is clearly described as such in John Dough. If I were to put on my "rationalist" hat and say Baum makes no mistakes, I think I'd solve this by suggesting that when the tide comes in from that side of the continent - perhaps it isolates the central part of the two countries - surrounding them with water - rather like Mont Saint Michel on the Normandy coast of France. But in reality I think Baum just messed up. The Mifkits are supposed to be on an island as well.

The Land of Ev also has some problems. In the Oz Club maps which we will be discussing in a few weeks Dick Martin and Jim Haff felt that Ev should be expanded to include the area designated as the Dominions of the Nome King, as those dominions are supposedly under the Land of Ev. I'm not sure I like expanding Ev that much. I think the area shown as being the Nome King's is a sort of no-man's land - an inhospitable rocky area not fit for much life. Clearly the Nome King has control over some of the lands above ground as he had authority to install the Giant with the Hammer.

There is a bigger problem with Ev though - the geography and position of the Castle (actually the City of Evna) is supposed to be on a strip of land thin enough that from the castle tower Dorothy can see both the Nonestic Ocean and Ozma approaching on the Deadly Desert. A massive harbor would have really helped solve this problem! 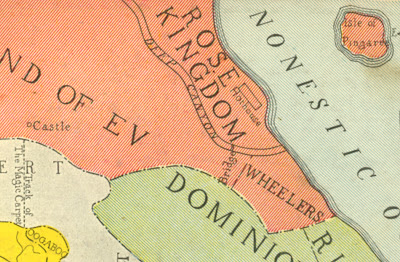 Another problem is that the island of Pingaree is shown to be far too large. Pingaree is one of the few locales in the Oz books for which we have exact measurements: three miles by four miles. If that scale is applied to this map the Land of Oz is only about forty-five miles wide - this seems a little bit undersized. That said, if this section of the map is accurate to scale, perhaps Dorothy could just barely have a view of both the desert and the Nonestic from a very tall castle tower. Especially if Evna is at a substantial elevation. At this scale the Castle of Evna is about seventeen miles from the Nonestic shoreline. The track of the Magic Carpet shows the crossing as occurring near the country of Oogaboo. Yet in Ozma of Oz the party returns to Oz and visits with the King of the Munchkins. If the position of the Evian castle is correct it's hard to imagine any path that would take one from Ev to the Munchkin Country. 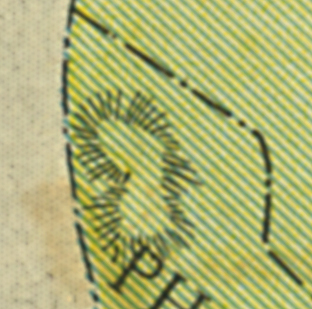 One thing I do find rather neat is the way Baum shows the mountain of the Phanfasms. It almost looks like there could be two peaks. We know from Emerald City that the Phanfasm's peak is tall and cylindrical  - rather like Mount Munch or "Devil's Tower" in Wyoming, better known as the mountain in the film Close Encounters.

I just wonder if seeing this indication of a double peak on the 1914 map might have been what sparked Jack Snow to write about a second mountain for the Magical Mimics.

The one place shown on the map that Baum never wrote about is the oddly named Kingdom of Dreams. This has never sounded like a Baum locale to me. I hate to think what the dreams in such a place are like considering the unfriendliness of its geographical neighbors.

Many of the inconsistencies or oddities on this map might be blamed on the Woggle-bug, who presumably drafted this map since he's credited with the other one. I doubt he did his own explorations, so some error and misinformation are bound to have crept in. Perhaps he interviewed people when they were visiting the Emerald City for Ozma's birthday party?

This map, like last week's, features the non-traditional compass. This raises a question. Since this is an Oz map made by an Oz character from an Ozian point-of-view, does this imply that the whole continent of Nonestica had the east/west reversal?

And I have a question for all my readers - post your thoughts in the comment section. Given the backward compass in use in the 1914 maps there are two ways that could play out in the physical world. Do Oz folk simply call east what we call west - essentially just swapping the names. Or do you assume this means the sun still rises in the east over the Munchkin Country and from an Ozian point-of-view travels backwards from our own?

For a variety of reasons I think the sun rises over the Munchkin Country and sets on the Winkie horizon. I suspect there might even be some mentions of such in the post-Emerald City of Oz books, though I have not looked for one yet. But none of the mortals has ever mentioned that the sun appears to travel backwards through the sky compared to normal earth rotation. Any thoughts?

Next week we will continue this discussion with a look at the map from The Lost Princess of Oz.
Posted by David Maxine at 4:58 PM

Actually, the Kingdom of Dreams may have been visited (in a manner) in a Baum book. This is, in fact, a question that I attempt to answer in my website's FAQ list, at http://thewizardofoz.info/wiki/About_the_Land_of_Oz#What_is_the_Kingdom_of_Dreams.2C_and_which_book_does_it_appear_in.3F.

I don't think that Baum had JOHN DOUGH very fresh in his mind when he designed this map -- beside the Hilna/Loland island error, he doesn't include the Palace of Romance or Pirate Island and has the Mifkets living in a country south of Oz rather than an island.

The island of Yew isn't included as well, although no one from that story was featured in ROAD (or anywhere else) so it's presence in this area is debatable.

Why JOHN DOUGH would have been so poorly remembered by its author remains a mystery. It's sort of ironic that Baum didn't add int the JOHN DOUGH details better as that was the only non-Oz fantasy that Reilly And Britton published. It was still in print, too.

I didn't mention the Island of Yew's omission as I was saving that discussion for when the isle finally gets added to Oz maps in the 1960s.

I don't really think it has a place in the Oz universe as it is a story from the distant past having taken place many centuries earlier.

Perhaps the book is unrelated to the "contemporary" Oz universe, since it is specifically stated to be happening in the remote past; however, it does mention knooks and ryls, giving it some connection with other 'mapped' works (Oz and non-Oz)featuring these creatures.

Very good points! It always bothered me as a kid trying to figure out all the problems with Ev on both this map and the Haff/Martin one. But it was fun to try and come up with ideas!
I've always rather liked to blame poor Professor Wogglebug for the mistakes as well...but it seems more likely Baum would make the mistakes rather than the Wogglebug, since Baum was possibly just adding things in from memory.
(I believe Neill later confused the Mifkets and the Scoodlers, but I'm not sure)
I also have thoughts on the Valley of Romance and Fairy Beavers that I'll save for those maps.

Personally I have no problem with the directions being reversed, but I still kind of always think of Munchkins being on the right and Winkies left...maybe left and right is actually reversed in Oz too!

Well, Baum does give separate regions for the Mifkets and Scoodlers, so he couldn't have totally confused the two. Ruth Berman wrote an artcle on Scoodlers, Mifkets, and Mifkits (from Neill's SCALAWAGONS) in the Winter 2006 BASUM BUGLE.

I believe I have somewhere seen the theory that the map was painted on glass, which would mean the reason for the mirrored directions is that we are looking at the map from the wrong side of the glass.

Actually, you're thinking of the "Fairylogue" map we discussed in the first MAP OF OZ blog. It was indeed on glass - but I don't hold much faith in the idea that it's being on glass has anything to do with the east/west issue. It's hard for me to believe any literate person wouldn't notice all the lettering was backwards if they observed the map from the wrong side.

Yeah, I read the blog backwards, so I got to that part later. With that map it would, like you said, be hard for Baum to make that mistake, and even harder for noone to notice it.

But if the map was drawn by the wogglebug... What if the wogglebug painted the map on glass and added the text later? Or if they were two who worked on the map from different sides of the glass? A farfetched idea maybe, but still an idea.

But if we assume that the directions actually are reversed in Oz... What could that mean? The first conclusion I can think of is that Nonestica is upside down. That would answer that question... but of course, at the same time raise a number of new ones...

The sun definitely sets over Winkie Country, since the sun being in the party's eyes as they travel to the Witch's castle is a plot element in Wonderful Wizard.

I did remember that reference in WIZARD (and generally I agree), but it raises a couple new questions. If we are looking at Baum's 1914 map with the Winkies in the West but on the right hand side of the map - that means that to a visiting American's POV that the sun moves backwards in the sky compared to how we see the sun in our world.

The other possibility is that the West is on left/West is on right change happened AFTER the events in WIZARD, a theory supported by the Fairylouge map. My suggestion is that the "flip" was somehow part of the barrier of invisibility spell in EMERALD CITY OF OZ in 1910.