Here in the Tiger Den there is a fair amount of material by and about Fanny Y. Cory, illustrator of L. Frank Baum's 1901 sci-fi novel The Master Key and Baum's 1903 fairytale The Enchanted Island of Yew.

Cory was also a newspaper cartoonist whose work included the one-panel Sonny Sayings, featuring the adventures of a cloyingly sweet toddler named Sonny. But (outside of Oz circles) Cory is perhaps best remembered for her 1930s comic strip Little Miss Muffet - a close cousin of Little Orphan Annie.

I have one piece of original Fanny Cory artwork which I've blogged about here. But I recently acquired a nice little signed letter from Cory written in 1901, the year she illustrated The Master Key.

I find it especially interesting to see this behind-the-scenes peek at Cory looking for work. The letter is to the editors of some unspecified children's page, discussing a project she's been given for "New Year."  In the postscript she asks why she did not receive the alphabet. I'm not sure if she's asking why she hasn't received a certain book or why she did not get a certain job.

It's a neat little letter. Tucked into my copy of Master Key or Enchanted Island of Yew it will likely be the closest I'll get to a Cory inscribed copy. 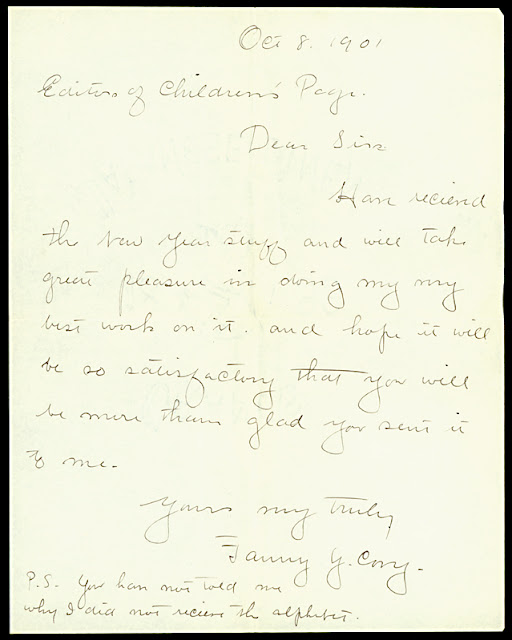