I Was a Pre-teen Margolotte 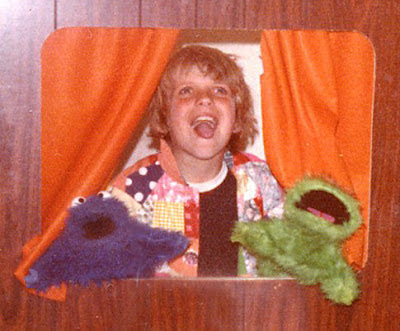 You may may be wondering why I'm sharing a photo of myself at nine years old playing with Cookie Monster and Oscar the Grouch. It has nothing to do with my fondness for vintage SESAME STREET toys, but everything to do with the patchwork coat I am wearing.

I don't recall where that little patchwork coat came from, but I do remember I immediately thought of the Patchwork Girl when first I saw it. I had nearly outgrown it in this photo. My sister wore it sometimes; she was five years younger than I was, but big for her age. Anyway, about a year after this photo was taken I got it in my head to make a Patchwork Girl out of it. 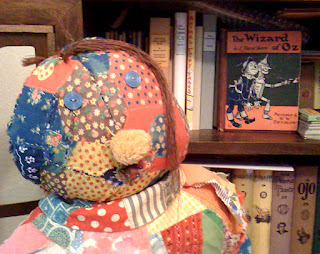 My mom took me to a fabric store and - wonder of wonders - they even had some patchwork-printed fabric! We bought several yards, I chose a pair of buttons for eyes, a yellow pom-pom for a nose, and some brown embroidery thread for her hair.

To make the body I spread a double layer of the patchwork fabric on the floor and had my sister lay down on it. I then traced my five-year-old sister and cut out the shape. When my dad came home from work I asked him to sew the basic seam around the edges, which he did. (Mom wouldn't have been caught dead near a sewing machine!) After Scraps was sewn I stuffed her with shredded foam rubber.

I sewed the head myself - by hand. I didn't really grasp the concept of research and failed to reread the description of Scraps in the book. So she ended up with blue eyes and the pom-pom nose. I had remembered her nose was yellow. I gave her some tan cotton gloves (now lost), and she wore socks and a pair of my grandmother's high-heels at first (they are now long-lost, too).

Over the years she wore out some. I think my mom's last dog got ahold of her, too. In any case her head ripped, foam bits started to fall out, and she's been a mess for a long time now. I finally decided she needed some basic refurbishment. I bought some poly-fil batting a few days ago, came home, took off her coat, and began the overhaul. 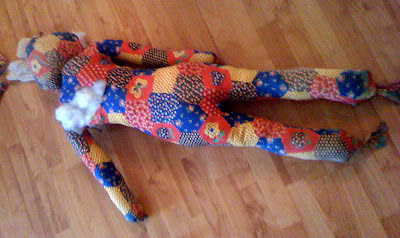 Because of the way I made her there was no easy way to get to the foam, so I made a neat incision in her back and pulled out all the foam rubber and restuffed her with the poly-fil batting. I must add that I get very sentimental over some stuff and it is really hard to throw the old foam rubber away. I stuffed it all in her when I was ten! Yet it's aging badly and if she was going to survive she needed a more stable stuffing. I still have to make some repairs to her dress, too.

When it came time to repair her head I pulled out the foam bits and inside her head I found a big hard wad of cotton balls. I had totally forgotten I had put them in her head. It was an un-researched attempt at giving her brains. I repaired a big rip around her mouth and decided she was restored enough. I had sewn pearls in her mouth for teeth when I was ten - but they eventually fell out and I've chosen to keep my restoration efforts to a minimum - limiting myself to preservation - not restoration. I will probably try to find a pair of kid-sized white cotton gloves for her hands, though.

A couple years after I made this Scraps I made an eight-inch-tall version to go with my Mego Wizard of Oz toys. That one is long gone. I'm glad I still have the big one - but I wish the cat didn't look at her so longingly! 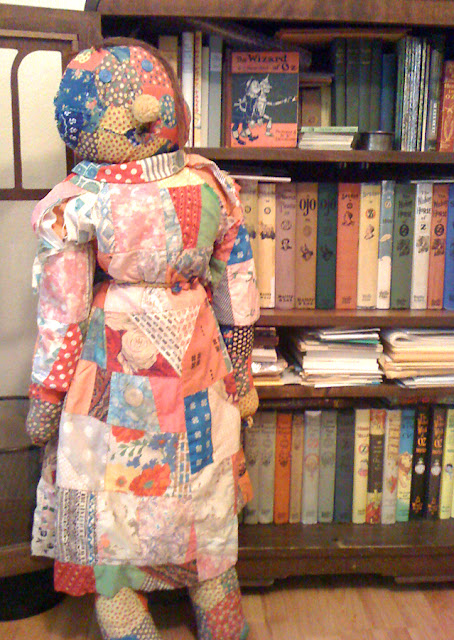 I'm just sure Mr. Purrs is just admiring the art.

Yeah, keep an eye on that.

I still have a doll I made of the Scarecrow in my storage unit. I'll have to break him out sometime.

What a great relic to have! I know I made some Oz-related toys when I was a kid, but they're long gone now!

Hey, I had that Oscar the Grouch puppet. The fabric tore where the upper and lower parts of his mouth joined, so we could actually stick stuff in there and pretend he was eating.

@ Rocketdave - I've seen other Oscars that had their mouth seem rip allowing them to swallow stuff. Cookie Monster came with a built in "swallow".

I sincerely hope you'll get rid of the old foam rubber--soon!

This would be a PERFECT addition and "guest" for the 100th Anniversary for next year's Winkies!


. . . . I've some white gloves. I can send you a photo via Facebook for you to see if they're alright for her.

I always wanted to make one of these!
But I was not very talented at sewing. :(

I did make a life size Scarecrow that I was proud of.
It even had a pointed hat that me and my Mom made from an old straw hat, a card board cone and some denim with little bells sewed on.
We even stuffed him, but instead of straw we used common hay!
It was a wonderful play mate until my jealous cat decided to mark his territory on him.