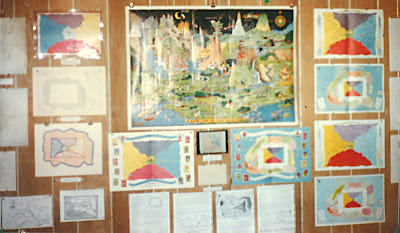 Today we begin a new blog series on mapping the Land of Oz. I hope to be be able to cover most of the known Oz maps in the coming weeks, but there are an awful lot of them. The photo above (from a display at an Oz convention in the early 1980s) shows only a few. I hope, too, that there will be a lot of discussion about all this in the comments section of each blog post. Who knows, all this analysis and exploration of Ozian geography might just result in a couple new maps! Shall we set off on our journey? I'm ready - my only advice is to leave your compass at home - they seem to be unreliable in the Land of Oz!

The earliest known map of Oz was created for L. Frank Baum's 1908 touring lecture series The Fairylogue and Radio-Plays. This map was created as a magic-lantern slide and projected on a large screen while L. Frank Baum introduced his audience to his fairyland.


Below is a portion of L. Frank Baum's original Fairylogue script describing this earliest map of the Land of Oz to his 1908 audience:

"Right in the center of these four countries, where their corners come together, is the beautiful Emerald City of Oz, which was just then ruled by a Wonderful Wizard; and all around this favored land, which is rich in fields of waving grain and pretty dwelling houses, and rich in the splendor of the magnificent Emerald City - a city built of gold and silver and set with thousands of precious jewels - all around the Land of Oz is a dreadful desert of deadly sands, which no mortal has the strength or the power to cross on foot. So the Oz people live all by themselves, and Dorothy was almost the first person from the big outside world who had ever come to this beautiful country. . . . So Dorothy took her basket, and followed by her little dog Toto began the journey to the Emerald City, following a road of yellow brick that led directly there." 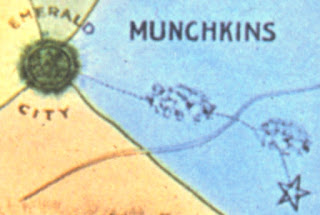 Sadly there is not much detail on this map and most of the detail shown relates directly to The Wonderful Wizard of Oz. We see the star showing where Dorothy's house landed in the Munchkin Country and the yellow brick road leading from it through a wooded area, crossing a large river and going into an even larger wooded area - or is that the Poppy Field? This doesn't follow the text of Wizard particularly closely - but then again this slide was not on screen for more than a minute or two.

Interestingly, when I scanned this map and started cleaning it up I realized there were faint images showing additional detail that has faded or worn off the glass slide over the years. There has always been lettering indicating a lake in the Winkie Country and in this enhanced scan we can see the faint outline of at least part of the very large lake. There is also another star which almost certainly indicated the castle of the Wicked Witch and future home of the Tin Woodman. No detail is shown in the Gillikin Country. I am fairly certain that the area in the upper right corner that looks like it might delineate a border of some sort, is in fact just a fingerprint on the original slide - though above the name of the country there does appear to be some dark residue that could be mountains or woods. The Quadling Country has more detail, though it's very hard to tell what it actually is. Is it a forest for the Fighting trees? The Spider's forest? Hills for the Hammerheads? All of the above? We do, however, get a nice little image of the palace of Glinda the Good. In the lower left corner is an area marked off for a legend or label of some sort. A few faint fragments of lettering are just barely visible, but it seems impossible to tell what it originally said.


The most unusual thing about this earliest map of the Land of Oz is that it is essentially square. Perhaps it owes its shape to the aspect ratio of magic-lantern slides? But then again, Baum's basic description of Oz works better as a square where all four countries are essentially equal in size, everything symmetrical in both directions. In the map we discuss next week Oz will have become the "great oblong fairyland" most of us are used to. No doubt the shape of Oz book endpapers contributed a great deal to stretching Oz into the more traditional rectangular shape. 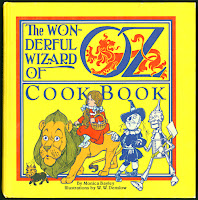 Another version of this map was published in the quite hard-to-find Wonderful Wizard of Oz Cook Book by Monica Bayley (Macmillan, 1981).

The map is even less detailed than the original, but I always liked that Bayley used the old Fairylogue map. The map is nicely reproduced and it does add a compass using the traditional directions. On a side-note, this little volume is really lovely and beautifully designed. It seems to have fallen off the radar of many Oz collectors. If you don't have one, keep your eyes out for a copy. 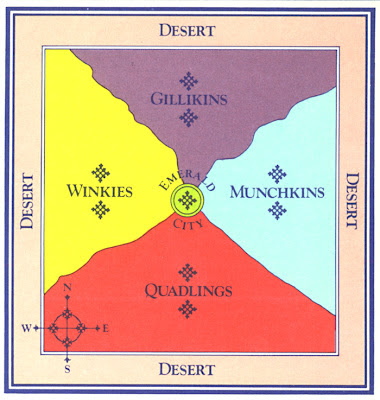 I can't close this blog without mentioning the sad history of the original Fairylogue slides. All of Baum's slides had survived and in the late 1970s belonged to Justin G. Schiller. Most of you know that he sold off his wonderful Oz collection in 1977. He sold the Fairylogue slides, too. They were purchased by an anonymous bidder and no one knows where they are anymore. No one has for over thirty-five years. Three of them were printed in full color on the back of Schiller's auction catalog - one of which was this slide showing the map. Justin had wisely made a set of Kodachrome slides as a back-up, which he gave to Dick Martin. These were shown in the early 1980s at each of the three major Oz conventions and then returned to Dick. However, when Dick Martin died, the slides could not be found, so now there is nothing. If the person who bought the original slides should happen to come across this blog, please do contact me and let us know the original slides still survive. They were an important piece of Oz history and it's pretty tragic that someone let them slip through the cracks.

OK, enough of that! Next week we'll look at the most important and influential pair of Oz maps from the endpapers of Tik-Tok of Oz.  (Click here for the next Oz Map blog post.)
Posted by David Maxine at 12:14 AM

I'm glad to see this series get off to a good start.

There is an nice short Oz map video on Youtube by an Oz Club member at http://www.youtube.com/watch?v=jIE_tDm6Veo

Finally, it is really sad to see a precious resource like Schiller's slides just disappear -- after all it was the 1970s and onward, and people knew the value of such items at that point.

I had a copy of that cookbook as a kid, but I don't know what happened to it! Haven't thought about it in years.

I have been so excited for these!
I've always loved maps of Oz.
Will you be including the strangely skewed ones from the Encyclopedia of Imaginary places?
I wouldn't blame you if you didn't. ;)

I am intrigued by the large poster in the first picture.
At first I thought it was the Dick Martin Wonderful World of Oz poster, and then I saw that it was not!
Do you have a better picture or more information on that one?

Let's hope the person owning the slides shows up...or at least the one who might know where Dick Martin's set are.
If those things are ever found it would be fantastic!

Also, was the original color purple on the fairylogue Gillikin section? It looks so strange.

I suspect the Gillikin Country was purple on the original slide and that the color has faded over the years.

I will try to get a good image of the large map in the photo of all the maps - However, that one wasn't exactly an Oz map. It was called something like "Map of the Imagination" and Oz is only one place on it. I don't currently own a copy.

I've always wondered about that lake, which isn't on any later maps and never features in the text of any of Baum's Oz books. Bringing in some of the post-Baum books, I guess it could be the lake in which Yankee's space capsule lands.

Part of the 'Map of the Imagination' can be seen at http://tinyurl.com/cyrowy9

Thanks for the replies! :)

What a shame it will be if those slides are gone for good.

Hello and thanks for posting this Oz map. I am trying to fine a copy of the script for Fairylogue. Do you know where it can be found?

Thanks for any help you can offer and again for this great Oz info.