White Edition Wednesday - NOT QUITE WHITE

Well, my friends, last week we finished our analysis of the "white editions," and this really must be the last post in the much ballyhooed "White Edition Wednesday" series as today's books are not quite "white."

But they should have been and nearly were! By now you've spotted the images and realize that today's blog will look at Reilly & Lee's 1969 edition of The Sea Fairies and 1970 edition of Sky Island. 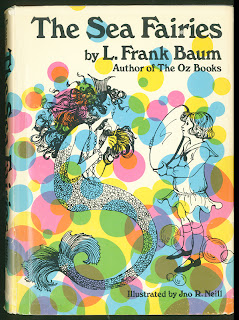 Now, you might look at the dust wrapper of the new Sea Fairies (at left) and say, "That doesn't look much like a 'white edition!' " And you'd be right. Not only does the book have a dust jacket, but the book is bound in plain cloth with plain, albeit silver, stamping on the spine. And the dust jacket illustration isn't by Dick Martin.

It's very unclear why Reilly & Lee didn't issue the books in the "white edition" format - but as you'll see as you read on, they came very close - or at least Dick Martin's contributions came very close.

The 1969 Sea Fairies jacket was designed by Lois Axeman and it was based on John R. Neill's cover of the third edition from 1920. 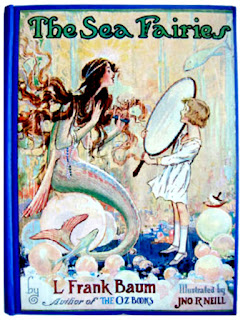 I had always wondered why Dick Martin hadn't designed the new jacket and, alas, I have no clear-cut answer. Dick did design a Sea Fairies cover for this edition and it closely followed the "white edition" format, yet for some reason Reilly & Lee seems to have rejected it and opted for the bubbly Lois Axeman design. I suspect the publisher simply wanted to try a more modern and contemporary look. Dick's semi-retro art-nouveau cover rough (seen below) is no where near as "groovy" and "with it" as Lois Axeman's design.


It's easy to see that Dick intended this new edition to match the "white editions." His design is based on John R. Neill's original Sea Fairies endpaper design from 1911 (below). Dick used both the poses of Cap'n Bill and Trot as well as the red and green color scheme. The fish on Dick's spine is based on the fish on the spine of the first edition. 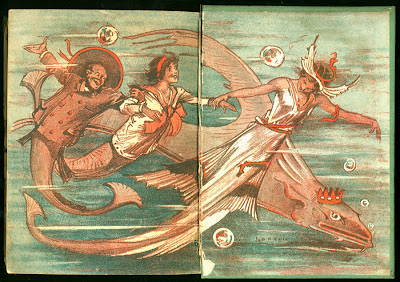 The following year Reilly & Lee put out a new edition of Sky Island, and this time Dick Martin was allowed to create the cover design. 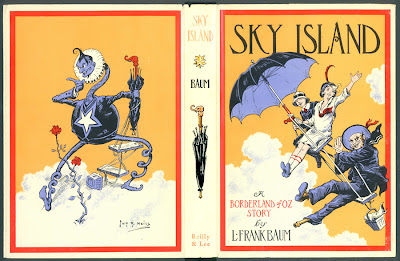 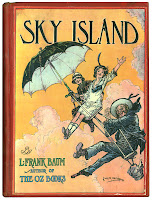 The front dust jacket panel is based on Neill's cover label to the 1912 first edition. The orange and purple color scheme is very attractive. It certainly looks like Dick was thinking "white edition" when he was designing it.

Like Sea Fairies, though, this book got a dust wrapper and plain cloth - this time the spine being stamped in iridescent blue. 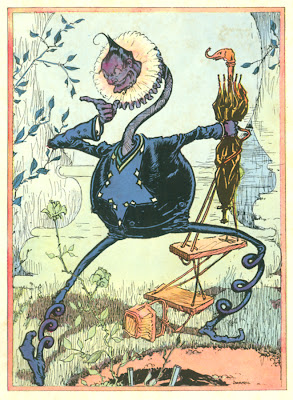 Unlike the "white editions," Dick Martin and Reilly & Lee made no alterations to the interiors of these editions of The Sea Fairies and Sky Island. They are essentially identical to the first editions (minus the color plates and pictorial endpapers). Both of these reprints have blank endpapers and each has a list of the fourteen Oz books in the forematter. 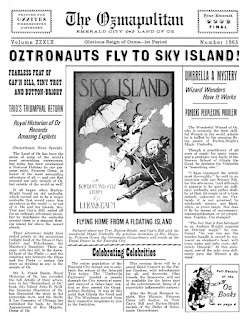 Dick prepared a new issue of The Ozmapolitan to publicize these two new books as the "Borderland of Oz" stories. You can read the entire issue of the 1970 Ozmapolitan by clicking here.

This really does seem to be the end of "White Edition Wednesday." It has been very popular. As a final little fillip of "white edition" goodness, here are the two advertising brochures that Reilly & Lee prepared. The longer brochure mentions that there are "twenty additional Oz titles available" by other authors. This means six of the forty Oz books were out of print.

I'm curious which six were unavailable and how long Reilly & Lee had any of the post-Baum Oz book in print. I know Merry Go Round in Oz was supposedly available new until the early 1970s. I must thank Michael O. Riley for the scans of the two brochures. Here they are.


We have one more post in this series, and you can read it here! Have fun!

Next week a new blog series will begin - Map of Oz Monday!
Posted by David Maxine at 1:33 PM

Shame. I rather prefer Dick Martin's SEA FAIRIES design over the one they used. It might be more "with it," but Dick's would have matched the Oz series better, and frankly, I find it much more interesting.

I have the Lois Axeman one. I like the illustration all right but those multi-colored bubbles make it hard to see.

A postscript: My hometown public library had a copy of "Sky Island" back in the '70s, but it was in library binding, and had the dust jacket images printed directly on the cloth.

I always had thought that Lois Axeman's cover was... lazy. It could potentially look attractive in full color, but the way it was done makes it look like someone didn't have time (or couldn't be bothered) to color it, and just threw the bubbles on there to have SOME color. Blah!

Maybe there should be Hungry Tiger Press editions of Sea Fairies and Sky Island with some interesting supplemental materials and re-created White Edition-esque covers? They would certainly beat any of the editions currently available.

I actually have this edition of Sky Island but without the dust jacket. Just wondering how much it would cost me if I sold it today??