The comics world has suffered another important loss with the death of French cartoonist Jean Giraud - better known to most Americans as Moebius. Best known in the United States for his Western series Blueberry, Arzach, The Airtight Garage, and work on such films as Alien, Tron, Willow, and The Fifth Element. You can learn a bit more about his long and fascinating career by clicking here.

In the late 1980s Eric Shanower worked with Moebius on a six-issue comics series called The Elsewhere Prince, published in the US by Epic/Marvel. It was published simultaneously in France by Les Humanoides. Moebius had written the plot/storyline, the dialogue was written by Randy and Jean-Marc Lofficier, and Eric drew it.

In 1989 Eric and I went to Europe for the first time and while we were in France we took the opportunity to visit Moebius in his apartment in Paris. It was a very pleasant afternoon.


I have a small association with Moebius myself. When I was editing Oz-story I had the nerve to ask him for a cover drawing. He supplied a pen-and ink drawing of a young man gazing at a huge gemstone. It was suggested that it could be an emerald (as in the Emerald City), and I knew at once that this would give me the Ozzy Moebius cover I had wanted. Moebius was not free to paint the sketch so the task fell on me - making the cover of Oz-story No. 3 a Moebius/Maxine collaboration. 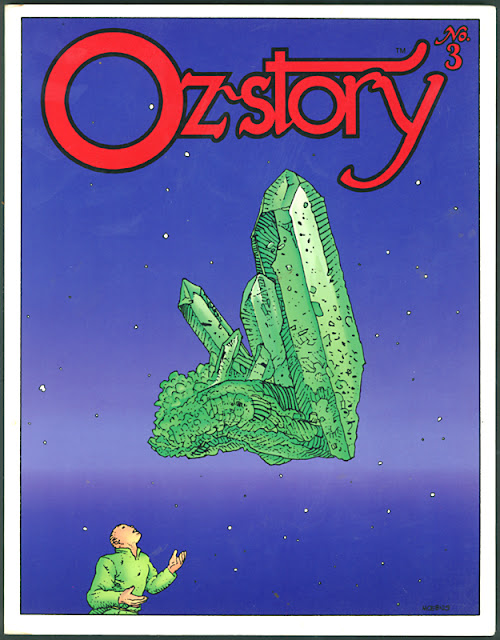 And another Moebius illustration was inside, accompanied by a poem written to fit it by Ruth Berman.