Life as an Oz Boy 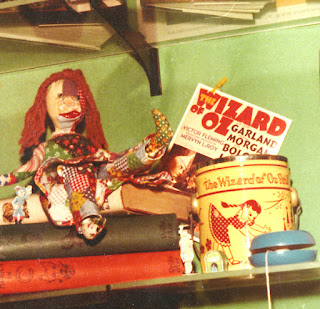 Back in the early-mid 1980s I was just starting to have an Oz collection that I was semi-proud of. I was also a bit of a closet-case, with zero social life and I had pretty much gone to live in Oz.

Anyway, one of the ways I felt comfortable reaching out of my little oblong fairyland was by showing off my Ozzy treasures to anyone who cared to look at them. Sometimes this meant dragging house guests into the so-called  "Oz museum," but I also used the collection as a social crutch of sorts by hosting the occasional Oz party or offering to show my collection at local libraries and things.

I recently found a little stash of photos from one of the better library displays I set up. These are from a display at the Golden Valley Public Library in Minneapolis - part of the Minneapolis Public Library System. I must say that I think my collection wasn't so shabby, considering I was only nineteen years old. 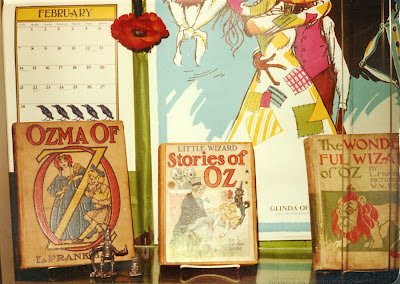 I had all forty Oz books by this time and several fairly nice first editions. The Hill Wizard above is a little beat-up and is a second-state copy, but I'd gotten it at my first Winkie Convention when I was fourteen for $56, so who's complaining? The seemingly very nice copy of Ozma of Oz was great for displays - sadly there is a bullet hole right through the middle of all the pages. I guess someone set the book up on a fence - covers open - and used it for target practice. The copy of Little Wizard Stories of Oz was one of the few ultra-bargains I ever found. I got it from a local woman for fifteen bucks at a book show. 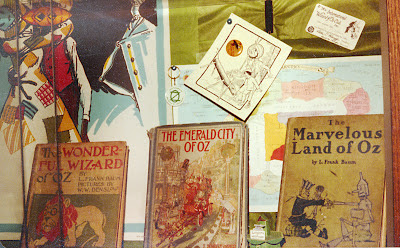 My first edition copies of Emerald City and Marvelous Land were a bit on the shabby side. 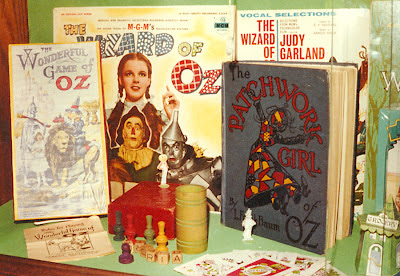 I liked mixing up the displays with a little of everything. So we get a copy of Patchwork Girl, my playing pieces for the 1921 Parker Brothers Oz game, and a miniature version I had made of the game. 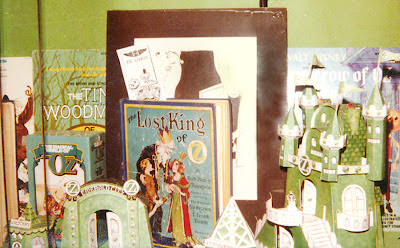 I found Dick Martin's Cut-and-Assemble the Emerald City great for displays. The little buildings could always fill a dull niche. The original drawing from Forbidden Fountain of Oz was a gift from Dick Martin at my first Ozmapolitan Con. 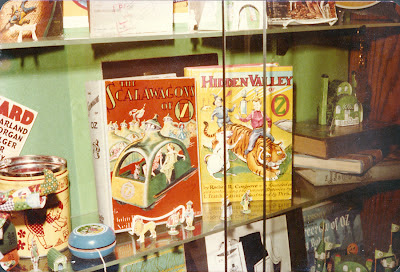 Another mixed shelf of Oz stuff. The blue thing is a yo-yo from the Banner Elk Land of Oz theme park. 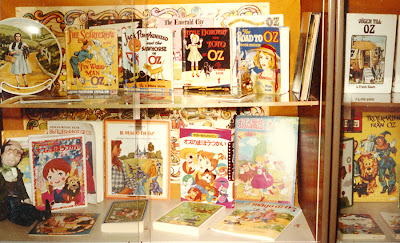 From my mid-teen years I had a strong interest in foreign editions - at last count I had about three hundred and fifty. The hard-to-see map in the background is also from the Banner Elk theme park, which I'd visited when I was thirteen. 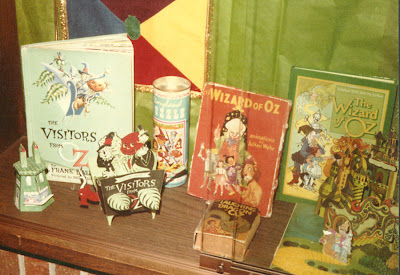 I made the little Oz flag when I was fourteen. You can read a blog about it by clicking here, if you like. I always found pop-up books worked well in displays, too. The paper Gump (another present from Dick Martin) is a favorite, though I don't have him set up anywhere at the moment. He lives flat these days.

So here I sit - decades later - and Oz still plays a huge part in my social life.

This is something I'd have enjoyed seeing - too bad Golden Valley wasn't really on my radar back then!

It seems to me you used Oz in a creative and outward-reaching way to enrich your social life. Whether it was pursuing opportunities to show off your collection - or making friends with the McGraws, Rachel Cosgrove, Dick Martin - you weren't just a hermit in a cave acquiring and hoarding and hiding.

Maybe you were closeted and feeling unfulfilled and lonesome, but you were crafting a life around Oz that was an interesting and special life.

And you didn't stop there, anyway.

@Glenn - I do realize that, and to some extent this was just my angle for how to write this blog post. I didn't feel like an Ozzy recluse. I think I may even have felt a little superior - which is probably even MORE embarrassing!

@Bill - Yes, I'm so surprised we never ran into one another in Minneapolis Oz circles back in the 80s. I did several exhibits like this and a small group of us started having Oz parties, etc. Actually, this exhibit was centered around my showing the PATCHWORK GIRL OF OZ film in the library's auditorium. The film was not very frequently seen back in the days of 16mm. I should add a bit about this to the blog-post.

My guess is that this must have been during the brief period when I was just out of college, and not particularly pursuing Oz. My club membership lapsed and it took me a couple years to get back into the habit!

A funny thing was that I got my few friends interested in Oz and when three of us decided to order Queen Zixi of Ix at different times, the local book store must have thought it was a hot item and ordered several more!

The good thing was that the book stayed in stock from the mid nineties to around 2005!!

I had a few Oz penpals too.
A girl in the Philippines who was friends with Fred Meyer and a local professor in Abingdon Va who had a huge Oz collection he would show off every so often in the paper!

VERY impressive collection. You would've become my friend and someone to show off in a minute!

I'm a lot less meticulous, but I really swooned over the Oz books (particularly OZMA OF OZ). Must admit I felt like a freak in general for loving books. Favorites also included Madelein L'Engle's books the Narnia series and PETER PAN IN KENSINGTON GARDENS.