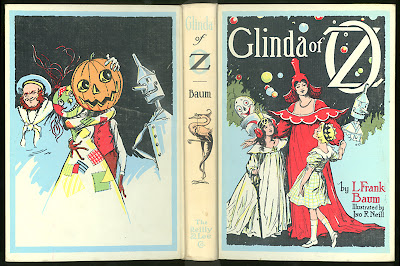 Last week we broke the spell of The Magic of Oz, so this week we must learn a new magical lesson from Glinda of Oz. But before we do I wanted to mention how happy I am that "White Edition Wednesday" has turned out to be so popular! Many of you probably expect this to be the last installment as we've now covered all fourteen Baum Oz books, but I have two more WEW blog-posts to write. So don't go away. 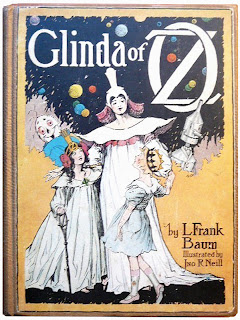 Now on to Glinda. The front cover is based on John R. Neill's original cover label from 1920. The most significant change is in Glinda's gown. In addition to making it a very appropriate red, Dick redrew the collar, adding a scalloped edge, shoulders, and a string of pearls. I think Dick Martin's new coloring has greatly improved the image. I like the light blue background better than the orange. Dick has given Dorothy a new green plaid for her dress, which successfully makes her look a lot more modern.

The exotic bird on the spine is from the first edition spine - though the bird also appears in the chapter heading on page 149. The back cover is a new drawing cobbled together by Dick Martin using several characters from the left half of the original pictorial endpapers of the first edition.


One thing I certainly never realized until I began writing this blog series was that Dick Martin used a number of drawings from Kabumpo in Oz to fill out the fore-matter of Glinda - such as this Ozzy drawing of Glinda and her reading matter from Glinda's "Famous Oz Books" ad, which Dick pulled from page 109 of the first edition of Kabumpo. 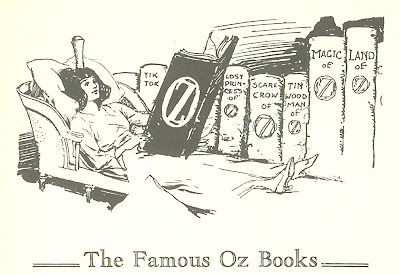 This time Dick has preserved the original ownership leaf. But on the verso, Dick has used a small scrap of illustration from the floral border-design of the endpapers of the first edition of The Emerald City of Oz. Dick has created a new (but very appropriate) frontispiece showing Glinda looking at her Book of Records, an illustration Dick has pulled from page 110 of Kabumpo in Oz. 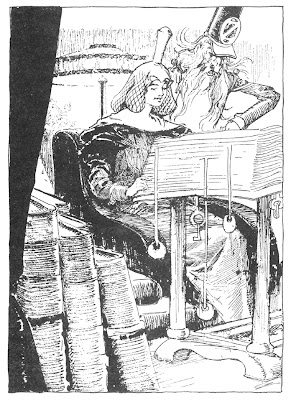 The Glinda of Oz copyright page really shows Dick Martin's attention to detail. He went to the trouble to re-letter the "All rights reserved" line  - a very subtle but handsome improvement. Dick also removed the "made in U. S. A." line and a few lines from the bottom of Glinda's gown. 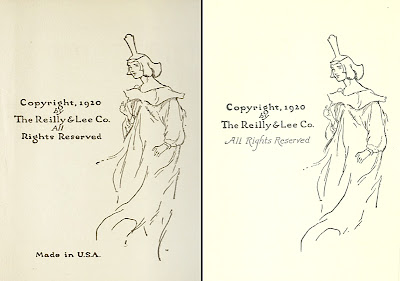 Following the copyright page and dedication page, Dick has added an illustration of Princess Dorothy which he cut from the "white edition" of The Tin Woodman of Oz. Dick has created a new illustration at the end of the book on page 280, using the right half of the original 1920 endpapers as source material. Dick has eliminated the Scarecrow and drawn a new background. He also neatly copies Neill's Glinda of Oz calligraphy for the words "The End." 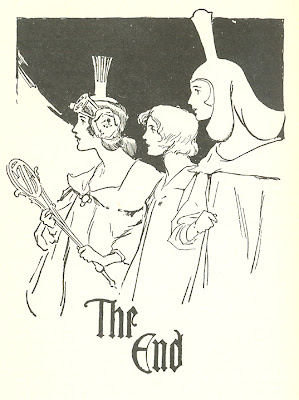 That may be the end of the "white edition" of Glinda of Oz, but there is a bit more to show. The back cover image was reproduced as one of the three very handsome OZCO posters from 1967 - the other two being the back covers from Wizard and Ozma.


This isn't the end of "White Edition Wednesday," because it isn't the end of the "white edition" story. I'll say no more today. You'll just have to check back next week and see where we go from here!
Posted by David Maxine at 2:44 PM

Are you sure that's not a picture of Glinda reading the Oz books (from Kabumpo)?

Duh! Yes that is indeed Glinda reading Oz books not Ozma in the illo from KABUMPO. I have made the correction in the blog.

I was thought it was OZMA! I guess the hairnet (snood?) wasn't printed clearly in the book I saw or I didn't pay enough attention.

Now that you mention the endpapers, I notice the characters are a LOT more focused on the embrace of Scraps and Jack (what was Neill thinking of that, I wonder?).

What a handsome cover! I don't really like the choice of the back cover since he used the Tin Woodman on the front as well. (I'd have chosen Ojo or a character from another illustration)
But what a pleasant surprise to see Cap'n Bill get a cover spot!

I may be mistaken but the "The End" page seems familiar. Was it also used in the Del Rey versions?

It is such a starnge, playful image of Glinda reclining like that, it's no wonder people think it's Ozma at first glance! I did as well back when I first read Kabumpo.

Not the end of WEW? You are such a tease sometimes. I guess I'll be back here same time same place!

Also, don't think ill of me for pointing it out, but Glinda's neckline seems to have plunged quite a bit since 1920!

Did Neill ever draw cleavage?