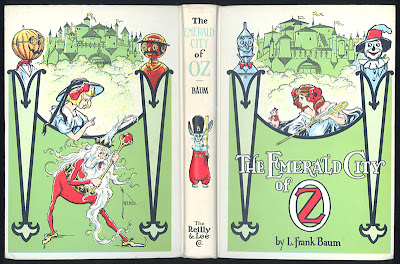 So sorry to keep you waiting so long for this installment of "White Edition Wednesday," but holiday travels made it difficult. Last time we took a trip down The Road to Oz - thus it was inevitable that our next stop be The Emerald City of Oz. 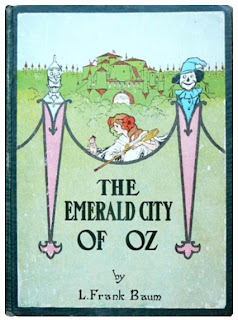 The cover was inspired by the pictorial label used on Emerald City circa 1917-1928 (at right), which was based on the original first edition endpapers for Dorothy and the Wizard in Oz.

For the front cover of the "white edition" Dick seems to have used a photostat of the Dorothy and the Wizard endpapers rather than redraw the image. But for the back cover he has traced in busts of Jack Pumpkinhead and Tik-Tok and he redrew part of Dorothy so that her arm hangs in front of the wall. Dick also eliminated Eureka. It's a very handsome design. You can see the original Dorothy and the Wizard in Oz endpapers below.

But there is one very interesting part of this cover design which I'd not particularly noticed before. The Nome King seems to be a Dick Martin original. I can find no Neill illustration that this Nome King is based on. With the background removed it's easy to see how very Martinesque this fine drawing of Roqaut really is. [Blogger's note: A reader has pointed out that Dick based this drawing of Roquat on the cover of the 1913 "Little Wizard" story, Tik-Tok and the Nome King.] 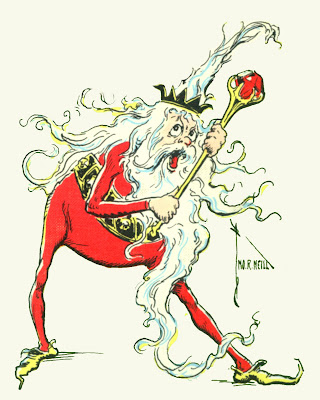 Dick Martin made very few modifications to the interior of Emerald City. There are only a few additions to the fore-matter. The "Famous Oz Books" ad on page one is illustrated with a modified version of the front cover illustration; Page four features a vignette of Ozma from the front cover. Indeed, the only real addition is the pair of lovely drawings on pages eight and nine of Ozma's and Dorothy's heads that were pulled from the original 1910 Emerald City endpaper design.


The earliest copies of the book list all forty Oz books, later printings reduce the list to Baum's fourteen. I have one query for my readers - Paul Bienvenue's Collector's Guide to Oz and L. Frank Baum shows an Emerald City "white edition" cover that is much darker, much more "emerald" that the usual "key-lime pie" color most copies of the book feature. Does anyone have a "white edition" Emerald City with this darker green? It may just be an oddity of Bienvenue's photograph - but it's also possible that some copies were much darker. 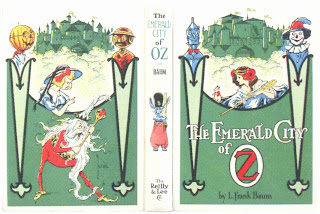 It actually looks like this "variant" might have been printed in true CMYK, the four process-color printing colors, cyan, magneta, yellow, and black (k). But Dick had clearly specified his own non-standard ink colors, so whether this odd-ball version is early, late, or a printer's glitch is hard to say. If you have one of these darker copies let me know if it had ads for fourteen or forty or if it has an inscription date.

OK, that's it for this week - next week we pay a visit to The Patchwork Girl of Oz!
Posted by David Maxine at 5:30 PM

My folks just dropped off my Oz collection which I haven't had regular access to for about 10 years. Which gave me a chance to give my White copy of the Emerald City way to a friend whom I'm trying to get addicted to Oz. so far so good. I'm also looking forward to the Patchwork girl visit, that was the first Oz book I ever bought.

Martin's illustration of the Nome King appears to have been based on the cover of TIK TOK AND THE NOME KING, one of the LITTLE WIZARD STORIES OF OZ from 1913.
http://www.vineyardexperience.com/Ebay/Nov2010/NomeJello_001.JPG

@Anonymous - Indeed it is! I will an an editorial comment to the blog mentioning this. Thanks so much for pointing it out. I never thought to examine TIK-TOK AND THE NOME KING as Roquat is fat and he's wearing the Magic Belt. So I assumed it couldn't be anything but OZMA or EMERALD CITY.

Both the darker and light versions are nice, but I think I almost prefer the depth of color in the dark one.
Patchwork Girl is next! It's one of my favorite books!

The white edition was the first version of Emerald City that I ever saw. When I later got a copy of the 1920s edition I was kind of creeped out by the incorrect coloring of Ozma's hair--she either has a section of hair that's green or she has a weird strand of hair hanging in front of her face. Thank goodness that Dick Martin's version of the cover colored Ozma's hair right.

I've long assumed that the darker green cover was later, but I guess that's not necessarily so.

Now that it's in colours other than yellow and white, Ozma's out-of-sleeve arm is much more apparent than before, surprisingly.

This is great--I really love your "white" edition history blogs.

The Emerald City of Oz "white edition" was the first book I ever bought with my own money--a whole $3.95. I ordered it direct from the publisher.

About a year later, a local bookstore got in about 6-7 first editon Oz books and a 1st of Sky Island. He sold them to me at prices between $3.00-$5.00, although I initially passed on the 1st edition of Emerald City (I already had the white edition) and Sky Island (it wasn't an Oz book).

I changed my mind and went back and bought Sky Island, but I didn't buy the 1st editon of Emerald City for $5.00. After all, I already owned a new copy.

That was more than 40 years ago and it still bothers me today.

Hi, if anyone's still reading. Happened across this while looking up values in advance of weeding out-- I have 3 copies of Emerald City!

Anyway, love the blog. My white-edition copy has the deep brilliant green. The 'ad' lists all 40 Oz books. It has a "this book belongs to" immediately following the ad, looks like a signpost on a large tree up which elves are pushing a large tome. (Is that what is meant by 'inscription page'?)