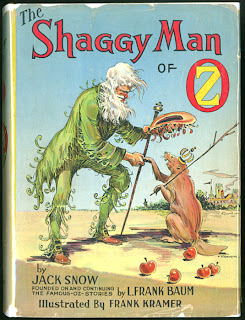 One of my favorite Oz acquisitions of 2011 was this very nice first edition copy of The Shaggy Man of Oz in a rather nice first dust jacket.

I've generally enjoyed the Snow Oz books. They don't violate Baum's Oz as much as Thompson's often do. I've also developed a fondness for Snow because he was gay in a time when it was not so easy to be so. I wish someone had done an in-depth interview with him, or an oral-history of sorts (though that really wasn't being done much back then). Snow did leave his personal papers to Fred Meyer - but Fred proceeded to destroy all of Snow's personal letters and documents not of an Ozzy nature. It's a great shame. Snow's private papers might have shed some light on his private life in New York City but Fred had a homophobic streak and probably felt he was improving Jack's reputation by destroying the personal material.

The thing that makes this copy of Shaggy Man a favorite acquisition of 2011 is that it is inscribed by Jack Snow on the ownership page: "This Book Belongs to Pat and Janet Nelson with love from the author, Jack Snow".

I've no idea who Pat and Janet are, nor whether Pat is male or female thus the book could be inscribed to an adult couple or to two little girls. Perhaps they were twins like Twink and Tom? In any case I'm very pleased to have this small but direct contact with the fourth Royal Historian of Oz.

Forgive me for saying, but I feel like Mr. Meyer was a double edged sword for the world of Oz.
Those letters could have maybe even made for a biography.

One has to realize this was 1956, not 2012. Fred probably thought he was doing Jack Snow a favor. And we have no idea if Snow himself wanted his private life made public.

It was indeed 1956 - but that is no excuse for destroying history.

Fred was very homophobic. He tolerated his gay friends in the club because he really had very little choice.

When I asked Fred about the private Snow papers he was coy and a bit snide. Fred said something along the lines of, "nobody needs to know about all those little shenanigans Jack got into..." Fred's attitude seemed to be he was cleaning up a messy bit of history.

Fred was still terribly homophobic to the end of his days. In 2000, at the IWOOC centennial conference, Fred sat outside the "Why Gay Men Like Oz" panel so he could forbid families or children from entering the room.

Heck, there might even have been a third edge knowing Fred.

Thanks for showing this. You don't seem to come across too many books signed by Snow.

Thanks, Scott - True enough. I have seen very few books signed by Snow - though I'm happy to add that my copy of DARK MUSIC is also signed.

One of the pinnacle of my collection is having all four of Jack Snow's books in dust jacket.

I, for one, would like to have known what shenanigans Jack Snow got into. What we know about him makes him sound like a dismal guy.