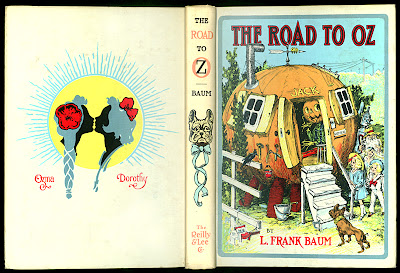 Last week we looked at Dorothy and the Wizard in Oz - this Wednesday we journey down The Road to Oz. This "white edition" is relatively unchanged from the usual Reilly & Lee edition beyond the new cover design and a few minor additions to the fore matter - but the cover is one of my favorites. The front cover is based on one of John R. Neill's finest pen-and-ink drawings from the interior of the book. I don't know that Dick owned this original drawing at the time he designed the "white edition," but he did eventually have it in his collection.

My suspicion is that Dick already owned the drawing. He certainly would have had access to it in the Reilly & Lee files - and I think the new "white edition" cover is more than likely based on the original art rather than the version printed in the book. There is a lightness and subtlety to it - this is one cover image that does not appear to my eyes to be "Martinized."

Of course the "white edition" of Road is the only one in the series to have its correct original endpapers, since Dick chose these handsome Road to Oz end sheets for each of the fourteen volumes. 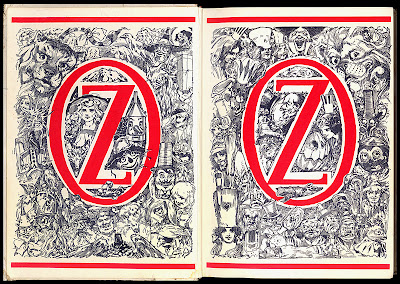 As I mentioned above, the fore matter in Road got very few changes. For the "Famous Oz Books" ad on page one Dick created a new drawing based on the donkey-headed Shaggy Man from the cover of the first edition. 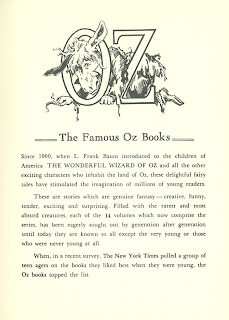 Dick added an Ozzy border to the original ownership leaf (see below) which I think quite an attractive change.


Facing the half-title page we come to an odd choice - Dick has added a flock of butterflies drawn by Maginel Wright Enright for Baum's Policeman Bluejay (1907). 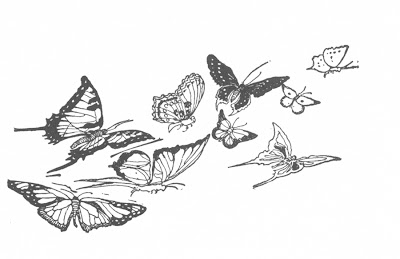 The title page has been reset and Dick has added a small head of Jack Pumpkinhead to replace the usual Reilly & Lee "lamp" device. Finally, facing the author's note, Dick has printed one of the "laughing children" chapter headings with an "Oz" in the center. And after the ads at the end of the book we get the redrawn Toto head from the spine once again.

The Road to Oz was my favorite Oz book as a child and in many ways it still is. No Oz book but Wizard introduces so many good and long-lasting characters, the alleged plotlessness never bothered me - road-trips don't have plots - and no Oz book ever had finer illustrations.


"White Edition Wednesday" is going away for the holidays but it will be back on January 11th with The Emerald City of Oz.

I also never understood the people who complain about Road's plot or lack thereof.
I enjoyed the story as a child (and still do) and I think that's what's important. Baum knew that.

Besides, it didn't really need a plot like Wizard or Land since it began as a prank by Ozma to let Dorothy have some fun and explore new lands.
I found it much more enjoyable than the tour in Emerald city of Oz.

Have a wonderful Christmas and New Year and I look forward to seeing the next post!

Eric's sister in that photo bears an uncanny resemblance to my niece circa 1986 or so. And Eric looks like my oldest brother circa 1955.

On the issue of the white editions--I have a free extra white edition copy of Land here if anybody NEEDS one. It's missing a free endpaper and the cover is a little scratched (not too bad--you have to look close). If you need one let me know--I just better not see it later on eBay!

My favorite part of the illustration used for the cover is the mice in the tiny bed hanging from the fencepost!

with his first Oz book

Your argument is invalid.

If only Oz conversation could resort to silly memes...

The White version of Road to Oz was my very first Oz book I read when I was in 3rd grade. I remember staring at the in pages and I especially remember Toto's bow.

Hi - I was just wondering if you knew when this 'white edition' was published?
Thanks