The Return of RETURN TO OZ 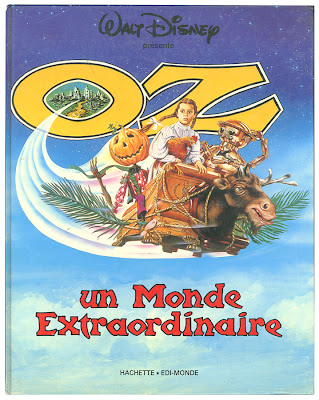 This fine French Return to Oz picture book was discovered a few months ago by my Ozzy friend Freddy. I had never seen one before and it wasn't listed in the published Return to Oz bibliography.

Given my fondness for Return to Oz and my interest in learning French, I had to have one! Knowing what to look for, my Ozzy friend Freddy pointed me toward a second copy - and voila! - I immediately ordered it from a fellow named Jordan in France. It took quite a few e-mails, some in my mediocre French and some in the seller's much better English, but finally the deal was done, the book was shipped. Then one day a few weeks later I go to the mailbox and the postman greets me saying he has a damaged package for me. Indeed, he ONLY has the damaged package for me - the large envelope covered in French stamps is ripped open and empty. The book is missing.

One day out on the road I get a call from a nice woman named Roseanne at the dead letter office. She has found my book! I explain I am on the road for the holidays and will be back on January fourth. She says she will hold it and mail it to me to arrive on the fifth. It arrives. My book and I are happily united and my faith in the U.S. Post Office is greatly renewed. Thanks to Freddy, Jordan, and Roseanne for helping me get such a nice copy of Oz un Monde Extraordinaire!
Posted by David Maxine at 9:01 PM

You recovered books from the dead mail room?

Indeed! I assumed the Dead Mail Room was very aptly named. And since the book could have been lost in France or the U.S. or anywhere in between I was shocked to have them actually find it and call me back based solely on my description of the book!

Nice find. I am still waiting for 3 Italian Oz books I ordered about 4 months ago from Italy. They were returned once to the seller (apparently they never made it out of Europe), and he is trying again. They are so beautiful; it will be worth it if I ever finally get them!

I hope you do another Blog about this book, I should very much like to see how the pictures in this book compare to the ones I/we have and the number of pages there are and . . . yeah, how they'd fit into my Recut Slideshow video.