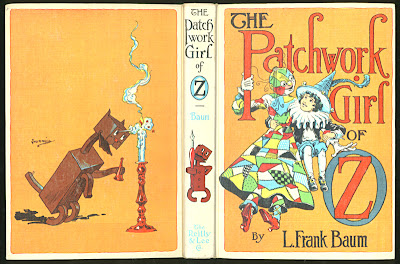 Last week we looked at The Emerald City of Oz, so this week we get to spend some time with The Patchwork Girl of Oz. For the cover Dick Martin adapted the original 1913 pictorial dust jacket design seen below. 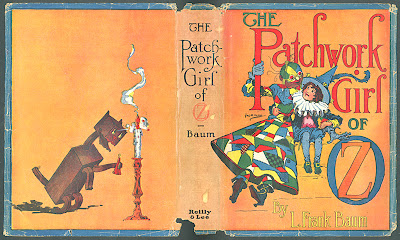 The new cover design is in fact wholly redrawn and re-lettered by Dick Martin, though he clearly stays very close to John R. Neill in spirit. Breaking up the edges of the orange background with the parchment effect is a nice touch and the removal of the "steps" that Scraps and Ojo seem to be sitting on makes the image a bit simpler and elegant. The Woozy on the spine is from the original edition of the book. It's interesting to compare Neill's original (below left) with Martin's redrawn version (below right). 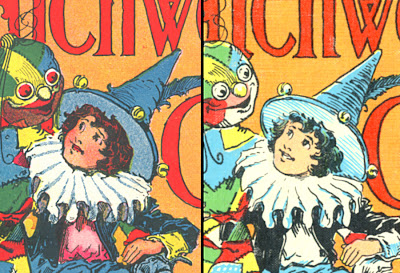 In many ways I think Martin has improved the image, making Scraps and Ojo more visually appealing. I'm especially glad Dick got rid of the red eyes and the Fred Flintstone-esque five-o'clock shadow on the Patchwork Girl.

Dick Martin made a number of interesting modifications to the interior. He eliminated the original ownership leaf, but reused the illustration on the "Famous Oz Books" ad page. 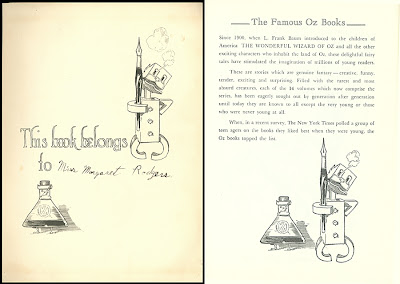 Dick Martin made two really nice "fixes" to the fore-matter. In the original color edition (circa 1913-1935) the Patchwork Girl's hair on the half-title was printed in red. When the color was eliminated in 1935 it left the illustration a bit nonsensical, showing Scraps with no hair and some missing art where the hair used to be. Dick drew in new "hair" and inked in a bit of the missing art to make the picture whole once again.

Dick gave the same treatment to the picture of the Shaggy Man listening in on "the wireless," but note that Dick repositioned the sparking letters to avoid some rather ugly overlaps and clunkiness in Neill's original.

Bibliographic Oddities
The earliest copies probably featured a list of forty Oz books on page two, but none of the copies in the Tiger Den list forty Oz books. Can anyone out there confirm a copy listing all forty titles? However, in looking over copies I have access to, I found two variants of the book featuring the list of fourteen Oz books. In variant one, the "Famous Oz Books" ad has had the numeral "40" replaced by "14" in a new bold typeface and on the verso the ad lists the fourteen Baum books at the top of the page. Clearly the other twenty-six Oz books in the list have simply been eliminated. At the bottom of the page is the publisher's name (see below).

Variant two, clearly later, has had the "Famous Oz Books" ad reset and partially rewritten, eliminating the need for a number at all. The list of the fourteen Baum books on the verso has been centered and the publisher's info has been eliminated.


What is odd about these two variants is that variant one was purchased new by me in 1979. It has a penciled-in price of $8.95 and it was bought at a major chain bookstore. The cover of this copy is also stamped in the lighter blue I believe Dick Martin preferred, yet this copy also has the under-sized boards, making the stamped image wrap wrongly. The interior is clearly quite early - the under-sized boards (I believe) indicate a later date. Variant two was recieved by Eric as a gift in 1971 and it has the proper-sized boards, but the blue ink on the front cover is the darker process-blue.

I find it very odd that a copy with an interior printed before 1971 shows up at a new bookstore in 1979 - though by that time the "white editions" were officially out of print. I'm not sure exactly what to make of this, but it is something to ponder. Any of you have any other variants?

That's it for Patchwork Girl right now - next time we'll pay a visit to Tik-Tok of Oz.
Posted by David Maxine at 6:30 AM

I'm surprised you found any edition for sale in any bookstore. I always looked for them in the late 1960's and I never saw any.

Either they sold out quickly or their distribution was terrible. I suspect the latter.

Dick made a big improvement on the coloring of that cover. Those hellish red eyes on Scraps are just so ugly. I think Ojo's brighter eyes are better, too.

I never noticed the "steps" Scraps and Ojo were sitting on till you mentioned them!

What an improvement!
I hated the red eyed PWG, she was already scary to me as a child and when I first saw that cover I was freaked out.
Ojo also looks way more appealing.

This was my favorite Oz book as a kid. :)

Very nice compare and contrast…the Patchwork Girl was my favorite…followed by Handy Mandy!

@Scott - The white editions do indeed seem to have been tough to find in stores. I never saw them in any store until about 1975 or 1975 when they showed up at the best toystore in Albuquerque (called Toys by Roy) and then at the cities first B. Dalton in Winrock Shopping Center.

However, after word went out that they were being put out of print in favor of the little paperbacks I started seeing them all over the place - not remaindered, but full price $8.95. It may also have been that we got a lot of independent bookstores in Albuquerque in the late 1970s. Who knows. I also saw them at F. A. O. Schwartz in New York City in 1979.

Dick also greatly improved the angle of Scraps' head on the cover. It not only improves the composition but makes for a real engagement between Scraps and Ojo.

I remember seeing a boxed set of the White Editions in a major bookstore sometime in the mid 70s. I don't remember what images were on the box itself tho....

Thanks Patrick - I have plans to discuss the boxed set in an upcoming blog.

PATCHWORK GIRL was the most difficult of the white editions for me to find. I remember finding WIZARD in a used book shop sometime in the mid 90's for $5, but by the time I was looking seriously to complete my set a few years ago, I saw copies of PG as high as ten or twelve times that, as well as being few and far between compared to other titles in the series. I think it's one of Baum's best, and I wonder if Scraps' appealing personality had anything to do with the comparative rarity of her book.

I realize that this is an old thread, but my White Edition of The Patchwork Girl of Oz lists all 40 Oz books on the bibliographic page. I was wondering if you have any resources for valuation of this particular variation?