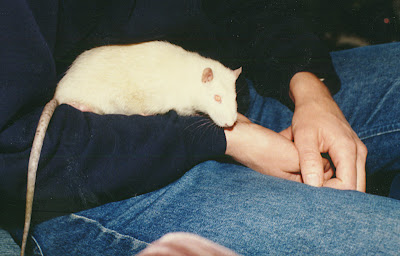 Percy came to live with us after Eric was hired to illustrate Rachel Cosgrove Payes's The Wicked Witch of Oz. Percy was to play a large part in the book, and Eric felt strongly that one reason Percy had not been much loved in Hidden Valley of Oz was because Hidden Valley illustrator Dirk Gringhuis drew the original Percy (in Eric's words) "like a deformed guinea pig."

Indeed, Dirk's Percy is almost uniformly ugly and unappealing. His paws are elongated and formless, his head often perched on top of his torso like a furry darning egg. Dirk seems never to have consulted rat anatomy or any rat photos. Occasionally Dirk's Percy is a bit more rat-like - but often he's just weird - especially when Dirk had to draw Percy in a non-rat-like posture, such as walking on his hind legs or riding in Jam's collapsible kite.

Eric determined to redeem Percy, to make him both look like a real rat and to make him a likable character.  Percy was to play such a large part in the book that Eric thought photo research would not properly suffice, so he headed to the pet store and bought a rat. At the pet store Eric watched the assortment of rats, checking out their personalities, finally selecting "Percy" from the ratty riff-raff.

Eric sketched Percy, taught Percy to "pose," after a fashion, by  placing food on top of the cage so Percy would stand on his hind legs. So not only did the illustrations of Percy in Wicked Witch look a lot more like a real rat - but the personality of this "real" Percy came through as well. 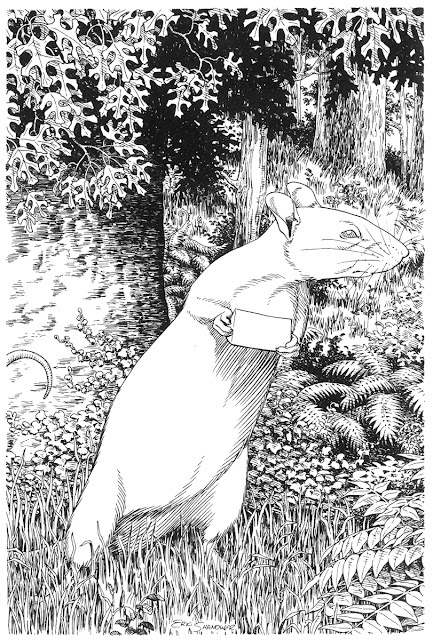 One thing to note about drawing rats from life is that male rats have rather large balls. Eric wanted to remain true to life, so there is a good deal of rat-scrotum in the book, though Eric kept poses as clean as possible for the most part, as in the fine illustration above.

The picture I remember the most about was the title page/frontispiece spread. Eric had drawn a life-sketch of the real Percy sleeping and decided to use it in the book. He then decided that it would be a fine title-page spread and he could fill up the space, and sort of tell a little story, if there were a lot of rat paw-prints. Eric needed some reference for rat prints so he dipped Percy's feet in blue watercolor and let him walk around on white paper. Eventually Eric got some good prints and Percy got a rat treat. 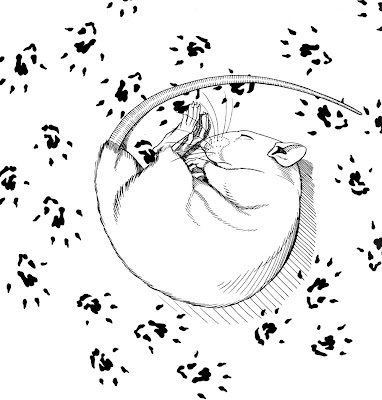 I think Rachel was pleased that Eric got a real rat to help him with the book. Rachel much liked rats. Eric got Percy in July 1992, and we had him for about seven months. Percy succumbed to a respiratory infection in early 1993. No rat ever had a better memorial than The Wicked Witch of Oz. So long, kiddo!


Illustrations from THE WICKED WITCH OF OZ copyright © 1993 Eric Shanower. All rights reserved.
Posted by David Maxine at 2:16 PM

That is so sweet!

I can't say I see anything wrong with Dick Martin's Percy, but I do know that rats can only have "elongated" arms if they're anthropomorphic like in "the Secret of NIMH" or half-human.

"Wicked Witch" certainly gave me a GOOD introduction to Percy, even though maybe the "kiddo" speech may not have been Baum. But i still loved, and have, the book!

I remember you guys telling this same story back at the hotel in Bristol 2010.
As I said then Eric's illustration of Percy curled up a sleep with his paw prints all over the page is one of my favourite Shanower illustrations :)

Percy is one of the few copyrighted Oz characters I want to make a custom of. I was lucky to get introduced to him by "Percy and the Shrinking Violets" and "The Wicked Witch of Oz." Didn't get "Hidden Valley" until later.

I never had the problems with Percy's character that some Oz fans did, but that was in spite of Dirk's art. The Wicked Witch and Oz-Story pictures of Percy are great: still the Personality Kid, but also indubitably a giant rat!

I liked Percy okay, but I wish I'd seen Mr. Shanower's illustrations first!
His Percy is a thousand times more charming!

But to be honest, most of Dirk's art was bad it was too generic for Oz and the characters felt dead.
I really wish Mr. Shanower could re-illustrate Hidden Valley!

I must say though, when I read "big balls" I had to reread again to make sure I wasn't imagining things! :)
Always something amusing and surprising here on the blog!