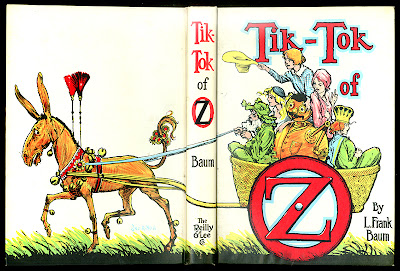 Last week we pieced together The Patchwork Girl of Oz, so this week we've little choice but to to wind up Tik-Tok of Oz. This is actually the first hardcover "white edition" that I ever read. I already owned the ten Rand McNally "white edition" paperbacks then available, but I had never actually seen one of the hardcovers until I found a copy of Tik-Tok at the Albuquerque Public Library. I checked it out and devoured it. I remember reading Baum's letter to the readers and wondering what the heck The Tik-Tok Man of Oz was - and I was really surprised at the wraparound cover design. And that unusual feature of this "white edition" gets us firmly into today's blog.

The cover of Tik-Tok is one of Dick Martin's greatest finds and best choices. It is based on an original drawing by John R. Neill that was meant for the dust jacket of the first edition in 1914. For some reason it was not used, and Dick probably found the artwork in Reilly and Lee's files in the early 1960s. It was first published as the cover of the Christmas 1961 issue of The International Wizard of Oz Club's journal The Baum Bugle. 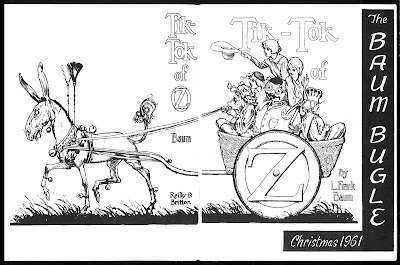 It would have been such a great dust jacket back in 1914! In any case, it finally joined the text it was meant for in 1964. It is too bad it throws off the uniformity of the full "white edition" series by lacking a spine vignette and having the wagon and harness wrap around the spine - but who cares, it's a grand image! Since I knew Dick Martin had access to the original line art, I was surprised to notice that he redrew the faces of Betsy, Polychrome, Ozga, and Queen Ann.


Also note that one can only see Neill's original spine lettering on the Bugle cover - Dick redrew it to make it narrower and a tad easier to read, and, of course, to alter the publisher's name.

I thought I'd take a few minutes on this title to discuss the four-color, hand-done, color separation technique that Dick used on these books. There used to be two distinct ways to prepare an image for printing in color. One could do it photographically which required a piece of finished full-color artwork which was then photographed four times using filters to create four separate printing plates: cyan (a light blue), magenta (a vivid pink), yellow, and black (called "k"). This photographic-separation technique was always used for high-quality reproduction, for photographs, fine art books, etc., but many publishers used a cheaper method - they had a graphic artist draw each of the printing plates by hand, using his imagination to "create" a color image. This is what Dick Martin did for the "white editions." Below is an image showing each of the four drawings Dick prepared to print the Tik-Tok cover.

The black drawing features the main line drawing - essentially Neill's original drawing. The blue drawing shows the grass, fills in some of the clothing, and outlines the title. The red drawing fills in the "Oz" and the title, the plumes on Hank's back, and is lightly shaded in to make Ozga's gown pink. The yellow drawing has lots of solid color, showing the grass again, the wagon, and a base-color for Hank. So you see, the light blue overlaps the yellow to make green grass. When you add the blue and red shading visible in Hank to the heavy yellow of Hank, you get a brownish Hank! First grade color theory at work!

Dick did something a bit unusual. He didn't always use the standard four printing colors. For example, above, he used a bright stop-sign red instead of the usual process-color magenta. The light blue was Dick's choice for all the white editions, though sometimes Reilly & Lee used cyan (which is a bit darker) and makes some printings of the books look a bit odd.

OK, on to Tik-Tok's interior. The ownership page has been omitted in favor of the "Famous Oz Books" ad - but you can see that Dick has reused the upper portion of the image. 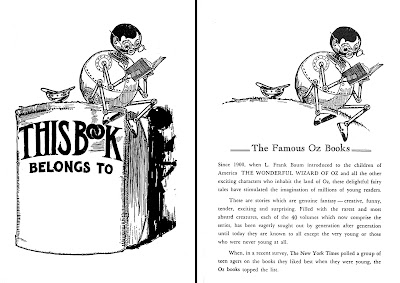 The cover of the original edition of Tik-Tok was very striking - perhaps one reason the original dust jacket design was abandoned back in 1914. Dick must have found the cover an appealing image, too, as he traced it and prepared a new frontispiece for the book - and eliminated Tik-tok's gun. Note, too the blue outlining of the title in the original cover design. It is clearly Dick's inspiration for the same thick blue outlining on the "white edition" cover. 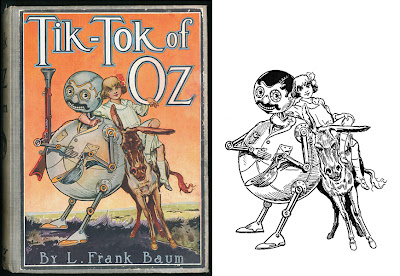 There are four copies of the "white edition" of Tik-Tok here in the Tiger Den, yet every copy here lists all forty Oz books on page two. Does anyone out there have a copy listing only Baum's fourteen?

Eventually, Rand McNally did release Tik-Tok in paperback, though I only found it in 1978 just as the paperback rights were being pulled from Rand McNally. It was at the same store on the same visit that I first saw the Glinda paperback, too. Rand McNally never did publish paperbacks of Rinkitink and Lost Princess. Do any of my readers recall exactly when they first saw or purchased a copy of the Rand McNally Tik-Tok or Glinda?

Next week, The Scarecrow of Oz!
Posted by David Maxine at 2:15 PM

I haven't seen a white cover edition of Tic Tok in years. If I recall correctly, only one of the two original map endpaper designs was reproduced. Am I correct, and, if so, were the compass "east" "west" directions reversed?

This was (as far as I can remember) the first white edition Oz book I read too. :)
Though the copy at my library was in bad condition and no where near that bright.
Seeing it though makes me want to go to the library and see if that copy is still around...or if any of the others were white editions.
This was back in the late 80's and early 90's so I'm not sure what the other versions would have been.
I know that the Wizard was the version illustrated by a woman, her name escapes me though.

I know everyone is hard on this book, but I've always liked it and Betsy, Hank, Polychrome, Ann and Salye were memorable to me.

@Scott - actually no maps were reproduced in the "white edition"of TIK-TOK. It had the standard ROAD endpapers. The map of the Land of Oz was included as a double-page spread in LOST PRINCESS and the map of the surrounding countries was included in RINKITINK.

I do have a Tik Tok with only a list of the 14 Baum books rather than the famous 40. Around 1970, my parents bought remainders of all the white editions we didn't otherwise own for $1.00 each. All except Wizard, Land, Lost Princess, and Tin Woodman.

I had always wondered about that "white" Tik-Tok cover that I could only find on 'the Oz Books' site (I think the Piglet Press site, not the "Oz Project") but never anywhere else, let alone in better condition . . . now, again, I know better!

And I see Dick Martin also made Betsy's hand in a more natural position, rather than hanging in mid-air without the 'O' . . . not to mention Tik-Tok looking a bit more "Baum" like with his *ahem* hair darkened.

All these re-drawn images makes me wonder what happened to Dick's artwork. The white edition stuff must have been pretty piecemeal and I suppose that it could have been lost in the printing process, but presumably Dick's illustrations for MERRY GO ROUND and the Club publications survived. Did they go into private collections? Or did they pass into the Club archive after his death?

@Mike - very interesting you have one listing only fourteen. It boggles the mind to try to understand what Reilly & Lee were up to. Eric bought his copy listing in 1970, too. One of my ex-library copies listing for has a library acquisition date of early 1966 - and as I said i bougth my good copy (listing 40) in 78 or 79.

It's not quite right to say you bought your books as remainders as the books continued to be reprinted for most of the next decade. I suspect you bought them from something like Publisher's Central Bureau (a discount house) where a number of people got their copies on the cheap. Thanks for the info. BTW, does the page one ad in your copy list 14, 40, or the neutral paragraph without a number?

@AMWise - The cover art for all these books, the color roughs for the covers, and the endpapers for WIZARD were all sold by books of wonder in their ART OF OZ catalog in the early 1980s. The MERRY GO ROUND art survives but I cant recall where at the moment - possibly at the Kerlan Collection in Minneapolis. All of the Club Oz book art was distributed by Dick to friends in the club - I have several pieces from FORBIDDEN FOUNTAIN. Some of the VISITORS art is in private collections, too (I have one drawing) but I have never seen anything survive from the 1961 abridgements or the Dover activity books.

It was Publishers Central Bureau. Funny I can remember the price but not the name. The 10 white editions we got from them (as I said, all except Wizard, Land, Lost Princess and Tin Woodman) all list only Baum's 14, as does the white edition copy of Lost Princess I got much later.

Thanks Mike - If all of your books from back in 70 have only the fourteen listed it makes one wonder if these books started with forty, dropped to fourteen, and then restored the ads back to forty. All of these odd copies listing 40, that were bought late in the 70s, can't be back-stock from 1965. I'm hoping when this series is done there might be some clue as to what was going on with Reilly & Lee's odd-ball erratic printing schedule. Sigh ...